TEHRAN, January 4 -Europe seems to be filling in the diplomatic vacuum where and when the United States retreats due to US President Donald Trump’s apparent conviction to undo the policies of the former US administration. 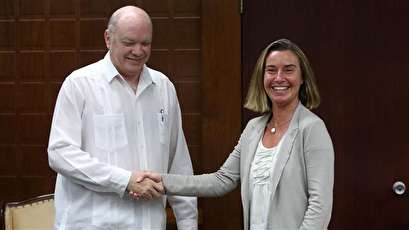 TEHRAN, Young Journalists Club (YJC) -Europe seems to be filling in the diplomatic vacuum where and when the United States retreats due to US President Donald Trump’s apparent conviction to undo the policies of the former US administration.

The US, under Trump, has chosen to withdraw from international pacts — including ones that involve Europe — that the administration of former US president Barack Obama negotiated.

Most recently, the incumbent US administration rolled back parts of a landmark Obama-era deal with Cuba, under which relations were restored between Havana and Washington after over five decades.

That reversal, as well as other policy U-turns by Trump, has portrayed America as an unreliable partner.

On Wednesday, the EU’s foreign policy director, Federica Mogherini, began a high-profile two-day trip to Cuba, aiming to strengthen the bloc’s economic and political ties with Havana and “reconfirm” an agreement on trade and cooperation between the two.

“Regardless of the changes in policy in Washington, the message I am bringing here is that the friendship and relationship with the EU is here to stay. It’s solid, it’s stable and it’s reliable,” the EU’s top diplomat said.

At the start of her official visit to the island country, Mogherini met with Cuban Foreign Trade and Investment Minister Rodrigo Malmierca to strengthen relations and accelerate the implementation of the bilateral accord, which was signed in December 2016 after almost two years of negotiations and provisionally took effect on November 1, 2017.

An assertive EU & a declining US

Mogherini has in the past hinted at the US’s “unpredictability” and reaffirmed that countries can instead rely on Europe with confidence. In May last year, she said explicitly that the US might be “losing leadership” on issues of global importance and said Europe could “occupy the space” being vacated by Washington.

“There is an opportunity for the Europeans and the European Union to position itself as a partner to all our interlocutors in the world, be it on the big global issues where maybe Washington is losing leadership,” she said.

In Cuba, Mogherini said the EU opposed unilateral US measures against the island country in part because they would impede the bloc’s relations with Havana.

“We’re against the effects the US actions have on citizens, companies and European interests. We cannot accept that unilateral measures impede or deteriorate our economic and commercial relations with Cuba. I sincerely believe it is not the time for shows of strength that don’t lead anywhere and which are really a sign of weakness,” she said.

Since Trump took office in January 2017, the EU — traditionally a US ally — has on more than one occasion taken a different course from Washington.

Trump has irritated the bloc by deciding soon into his presidency to pull the US out of a painstakingly-negotiated deal on climate change. The US president has also threatened to renegotiate the North American Free Trade Agreement (NAFTA), a deal that the EU deems done.

Europe is also concerned that Trump may go ahead and implement a campaign promise of imposing very high tariffs on imports of steel from Europe.