West encourages rioters to stir up violence in Iran: Pundit

TEHRAN, January 4 -Millions of Iranians have staged fresh nationwide demonstrations to renew their support for the Islamic establishment and denounce the recent wave of deadly unrest that hit some areas in the country. 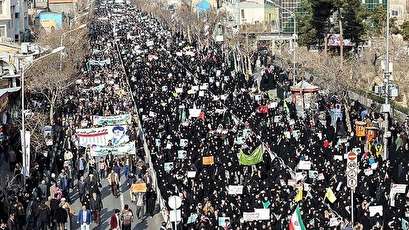 TEHRAN, Young Journalists Club (YJC) -Millions of Iranians have staged fresh nationwide demonstrations to renew their support for the Islamic establishment and denounce the recent wave of deadly unrest that hit some areas in the country.

Last week, a number of peaceful protests over economic grievances started in several cities, but those gatherings suspiciously changed color and turned ugly when groups of participants, some of them armed, launched attacks on public property, police stations and religious sites.

The violence drew praise from Tel Aviv and Washington, which voiced firm support for the rioters.

Marandi believes the West has been encouraging rioters in Iran through social media applications to carry out “violent acts”, adding that its agenda is to turn peaceful protests into mass violence.

He also criticized the Western-backed Persian media outlets for trying to fuel the flames of the fire in an attempt to create a crisis.

The analyst further denounced the West’s double-standard approach to the protests in Iran, saying that legitimizing the riots by making them seem like peaceful demonstrations is not only “dishonest” but also “hypocritical”.

He went on to say that Western countries deal with riots very firmly themselves, asserting that on many occasions they have shut down social media in order to quell the unrest.

Marandi emphasized that there should be a “sharp distinction” between peaceful protesters who have “legitimate” economic grievances and the rioters.

“If anyone is to complain [it] is the Iranians who should be complaining about Western interference," which turned their peaceful rallies into riots, said Marandi. "What we have been seeing over the last days, the protesters gradually melted away because they did not want to be associated with the rioters,” he added.

Meanwhile, Saeed Sadek, the other panelist on the program, opined that the recent protests in Iran are “political messages” which should not be underestimated, arguing that blaming the outside world is not a solution.

He also confirmed that Iran has outside enemies who seek to exploit the situation but noted the only option they have is to wage psychological warfare and to exaggerate what is happening in the country.

The analyst further suggested that the Iranian government should try to modify some of its economic policies in order to address the points raised by the protesters, arguing that foreign intervention will never happen unless there is a weakness inside a country.

In response to Sadek’s comments, Marandi maintained that economic problems do exist in Iran, reiterating that the grievances of the peaceful protesters have to be dealt with.

However, he said, the shortcomings do not give the Western countries the right to try to create an atmosphere where they can put more pressure on Iran.