TEHRAN, January 4 -The administration of US President Donald Trump is considering imposing more sanctions against Iran, says a senior State Department official, as Washington ratchets up its rhetoric in support of sporadic riots in parts of the country. 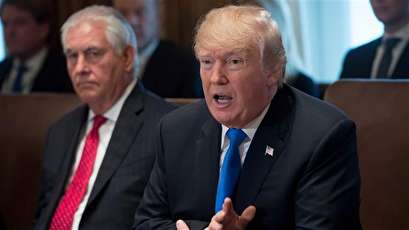 TEHRAN, Young Journalists Club (YJC) -The administration of US President Donald Trump is considering imposing more sanctions against Iran, says a senior State Department official, as Washington ratchets up its rhetoric in support of sporadic riots in parts of the country.

Andrew Peek, the deputy assistant secretary of state for Iraq and Iran, said this week that White House was weighing a reaction to the recent wave of deadly unrest that has killed over a dozen Iranians.

“From our part, we will hold accountable those people or entities who are committing violence, from the top to the bottom, against the protesters," Peek told Voice of America. "That involves examining actions we can take against those individuals, like sanctions and other means.”

Last week, groups of peaceful protesters gathered in several areas across the country, calling on the authorities to address their economic issues. Despite having no mandate, the protests continued uninterrupted for several days.

PressTV-UN envoy slams US 'grotesque meddling' in Iran affairs
Iran’s UN ambassador condemns US support for protests in the Islamic Republic as "grotesque" meddling in the country's internal affairs and a violation of international law.
The events, however, were overshadowed when armed elements and vandals showed up among ordinary protesters and began to launch attacks on public property, police stations and religious sites.

The original protesters soon left the streets upon calls by the authorities so security forces could deal with the rioters and sporadic violence in various cities.

Trump has been hyping up the unrest in a series of tweets over the past days, pledging that he would continue to support the rioting unlike his predecessors.

Vice President Mike Pence has doubled down on his boss’ remarks, blasting the European leaders and the United Nations for what he said was their failure to forcefully speak up” amid the violence.

UN Ambassador Nikki Haley has called for an urgent UN meeting on the situation.

This is while some members of Trump’s team have warned the Republican head of state against taking any step that would serve as evidence that Westerners are in collusion with the rioters.

The nature of the sanctions still remains unclear. After refusing to recertify Iran’s commitment to a 2015 nuclear deal, Trump said in February that he would introduce more bans against Iran’s Revolutionary Guard (IRGC) forces.

The deal, known as the Joint Comprehensive Plan of Action (JCPOA), put limits on certain parts of Iran’s nuclear programs in exchange for the removal of all nuclear-related sanctions. However, Trump has refused to hold up his end, contributing to the economic situation.