At least 471 people in Yemen infected by diphtheria, WHO warns

TEHRAN, January 4 - The World Health Organization (WHO) has warned that at least 471 people in impoverished Yemen have contracted diphtheria, a bacterial disease that has been killing one in 10 Yemenis since the outbreak started in the war-torn country in mid-August last year. 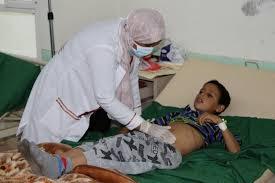 TEHRAN, Young Journalists Club (YJC) - The UN agency’s spokesman, Tarik Jasarevic, made the disturbing announcement on Thursday, adding that the west-central province of Ibb and the western province of Hudaydah were the hardest hit by diphtheria, which is easily spread between people through direct physical contact or the air.

“The overall case fatality ratio is 10 percent,” he said, noting that 46 deaths had been recorded since Tuesday.

Back on December 13, WHO announced that more than 280 suspected diphtheria cases and 33 associated deaths had been reported in Yemen, which showed a worrying increase in the number of infected people in a three week’s time. The disease last appeared in the Arabian Peninsula country in 1992.

The spread of diphtheria - which can be prevented by vaccine - compounds widespread hunger and one of the worst cholera outbreaks ever documented, with over 1 million cases and 2,227 fatalities since last April.

A nearly three-year-old war by Saudi Arabia on Yemen has virtually ruined the country’s health system, as critical shortages of medical supplies caused by Riyadh’s total blockade has aggravated the humanitarian situation for desperate Yemenis.

On Tuesday, the Yemeni Ministry of Health announced that 415 health facilities had been destroyed, either completely or partially, as a result of direct Saudi airstrikes, pointing out that more than 55 percent of the health facilities did not function due to the ceaseless military aggression, and that the remaining 45 percent operated with a minimum capacity.

Saudi Arabia has been leading a deadly campaign against Yemen from the air, land, and sea since March 2015 in an attempt to reinstate former president Abd Rabbuh Mansur Hadi, a staunch ally of Riyadh, and to undermine the Houthi Ansarullah movement. Over the past two years, the Houthis have been running state affairs and defending Yemeni people against the Saudi aggression.

The offensive has, however, achieved neither of its goals despite the spending of billions of petrodollars and the joining of Saudi Arabia’s regional and Western allies in the war.

The war, which has so far killed at least 13,600 people, has also taken a heavy toll on the country’s infrastructure, destroying many schools and factories.