Peru’s Fujimori a free man after discharge from hospital 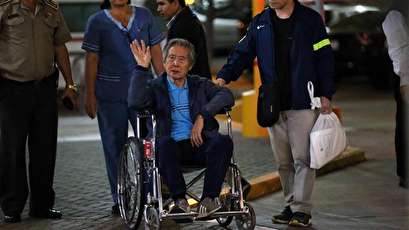 A frail-looking Fujimori, 79, held up a hand to wave to supporters as aides rolled him out the main entrance of Lima's Centenario Clinic in a wheelchair, before he was whisked away accompanied by his lawmaker son, Kenji, in a convoy of vehicles.

A woman repeatedly shouted, "We love you, we love you!" as she tried to reach Fujimori's vehicle through a line of security officials.

He was pardoned days after Kenji abstained from voting on Kuczynski's impeachment in what was seen by many as a backroom deal to save the president, facing corruption allegations.

The Christmas Eve announcement prompted a wave of protest in Peru. Fujimori was released after serving less than half of a 25-year sentence for human rights abuses.

UN human rights experts condemned the pardon as politically motivated and said it was a slap in the face to victims of his brutal rule from 1990-2000.

A court held him responsible for the killings of 25 supposed guerrillas and sympathizers in 1991 and 1992. It sentenced him in 2009 to 25 years in jail.

Relatives of victims have condemned the pardon, but many Peruvians admire him for his ruthless campaign to put down uprisings by leftist guerrillas, and supporters have hailed the decision to free him.

Kuczynski said his pardon was given on humanitarian grounds, based on the former president's poor health.

Fujimori, who has been in the clinic since December 23 — the day before the pardon was announced — was transferred from prison after suffering low blood pressure and an irregular heartbeat.

Peru's defense and culture ministers have resigned from the government in protest.

More than 230 Peruvian writers, including Nobel laureate Mario Vargas Llosa, have denounced the pardon, insisting Fujimori "does not suffer from any degenerative or terminal illness" and deserved to remain in prison as a "criminal against humanity."

Lawmakers wanted to impeach Kuczynski for allegedly lying to cover up his ties to Odebrecht, a giant Brazilian construction company that has admitted to paying hundreds of millions of dollars in bribes to officials across Latin America to secure public works contracts.

After initial denials, Kuczynski in December admitted he had taken money from Odebrecht for what he and the Brazilian company insisted were legitimate consulting fees. He denies any wrongdoing.