TEHRAN, January 5 - Finding alien life is an exciting prospect, but the sheer vastness of space can leave a vacuum to be filled with conspiracy theories and wishful thinking. One alien theory, surrounding Tabby's star, has now been debunked. 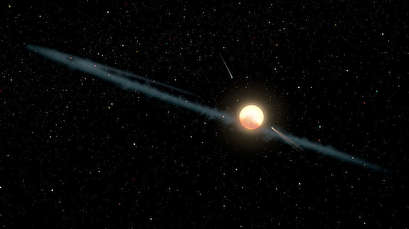 TEHRAN, Young Journalists Club (YJC) -Finding alien life is an exciting prospect, but the sheer vastness of space can leave a vacuum to be filled with conspiracy theories and wishful thinking. One alien theory, surrounding Tabby's star, has now been debunked.

The dimming of the Cygnus constellation star, given the moniker of KIC 8462852, has yielded speculation that something large, such as an alien spacecraft, may be orbiting it. The theory excited academics in SETI science (Scientific Searches for Intelligent Extraterrestrial Life), the general public and headline writers alike.

The bizarre light fluctuations from the star, which is 50 percent bigger than the sun, were first observed by citizen researchers in 2015 from data obtained by NASA’s Kepler space telescope.

It led to a number of theories, including that comets or even an alien-made structure could be blocking its light. Now a new paper involving those who originally cottoned onto the sporadic dips in brightness, pretty much blows the alien megastructure theory out of the sky.

In collaboration with the Las Cumbres Observatory, more than 200 researchers pored over data which showed that light wavelengths around the star were dimming unequally. The researchers, who used the ground telescope data from 2016-2017, suggest a solid entity is unlikely to do that.

“Dust is most likely the reason why the star’s light appears to dim and brighten. The new data shows that different colors of light are being blocked at different intensities. Therefore, whatever is passing between us and the star is not opaque, as would be expected from a planet or alien megastructure,” said lead author of the study, Tabby Boyajian.

Penn State University Professor Jason Wright, who was involved in the recent analysis of KIC 8462852, told RT.com that the “alien megastructure” theory was spawned out of an interview he gave in 2015. He later discussed the “very unlikely”prospect that the dimming could be caused by aliens collecting solar energy.

“It all started with an article by Ross Andersen in The Atlantic. He broke the story and that article got everybody excited,”he said.

Wright said the mention of aliens attracts interest from many areas, be it the general public or scientists searching for extraterrestrial life. But he believes alien aspect to Tabby’s star wasn’t necessarily a bad thing. In fact, it may have been good marketing for science.

“I think it attracted a lot of attention to the star for better and for worse,” he said. “But the better part is that it highlighted the mystery and how strange this star is. It made a lot of astronomers aware of how they could contribute and a lot have. In this particular case, we had over 200 people working with us to try and figure it [Tabby’s star] out.”