At least 180 members of Spain’s elite La Legión infantry regiment have voluntarily signed up to participate in the army’s unique weight loss program to battle obesity. 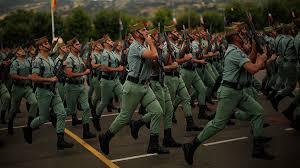 TEHRAN, Young Journalists Club (YJC) -Comprising six percent of the 3,000 soldiers serving in La Legión, the legionaries have been included in the army’s plan to slim down after their latest Body Mass Index (BMI) measurement was 30 points or higher, the World Health Organization’s threshold for obesity.

The soldiers are to undergo an individually-tailored program of nutrition and exercise, El Pais reports citing an army spokesman. The miracle course aims to burn fat at an incredible rate – between 500 grams and a kilo per week. Throughout the grueling program the legionaries will undergo regular medical check-ups.

Participation is voluntary, but soldiers who don't shed the excess weight might be banned from participating in parades or operations abroad.

“La Legión has ended up in a situation that requires a series of measures to reduce excess weight among its personnel,” an internal memo published this week by El País said, blaming the lack of fitness facilities and a higher average age among legionaries as contributing obesity factors.

The 48-week project consists of four 12-week phases. The first will focus on mentally preparing the soldiers for the challenge, which will be followed by a conditioning phase in which strength and endurance will be increased. The third 12-week segment will aim to achieve the highest physical fitness, while the final phase will focus on consolidating and maintaining the results.

For those out there wanting to get fit Spanish Legion-style, here's the five-course dietary plan: the soldiers are served two breakfasts: yoghurt and banana in the morning, followed by mid-morning toast, orange and coffee. For lunch, it’s salad, a main dish and dessert. During the day they can snack on a nutritious shake, milk, yoghurt or fruit. For dinner, soldiers will be served steamed veggies or salad with grilled meat. Daily alcohol consumption will be banned.

The news has been met with sarcasm on social media: some suggested the problem isn’t the fat, but the overly-tight uniforms (which include revealing open-necked shirts).