TEHRAN, January 6 - The United Nations Security Council’s emergency meeting on the recent protests in Iran at the request of the United States “discredits” the council and demonstrates how Washington “abuses” its powers as a permanent member to forward its own agenda, says Iran’s envoy to the UN. 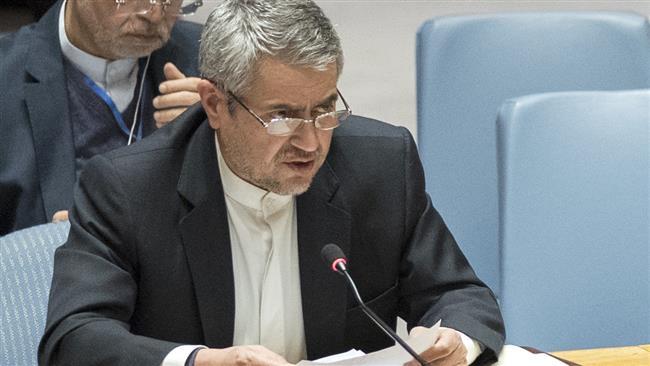 TEHRAN, Young Journalists Club (YJC) - Addressing the largely-divided session on Friday, Iran’s Ambassador to the UN Gholamali Khoshroo expressed regret that the council had been forced to reconvene and discuss an issue that was “purely domestic.”

“It is unfortunate that despite the resistance on the part of some of its members, this council has allowed itself to be abused by the current US administration in holding a meeting on an issue that falls outside the scope of its mandate, putting on display the failure of the council to fulfill its real responsibility in maintaining international peace and security,” he asserted.

Last week, groups of peaceful protesters staged unauthorized gatherings in several areas across the country, calling on the authorities to address their economic issues. Despite having no mandate, the protests were allowed to go on uninterrupted for several days.

However, some of events turned violent after armed elements and vandals took the opportunity to destroy public property and attack police stations, killing and injuring dozens of people in the process.

While many countries such as Russia, Turkey and Syria condemned the violence, US President Donald Trump hyped up the unrest in a series of tweets, pledging continued support for the rioters.

"There is a long history of US bullying at the UN, but this is a preposterous example: the purely internal affairs of a nation—in this case protests that the Iranian government has addressed with the utmost respect for the rights of the protesters and with every attempt to deal with peacefully, despite violent infiltrators and direct encouragement by foreign forces including by the president of the United States—is not the subject of debate by the world’s most important security organ," Khoshroo explained.

Acknowledging the “legitimate grievances” of the people who held peaceful rallies, Khoshroo said Washington was in part responsible for their hardships by failing to deliver on its obligations under the Joint Comprehensive Plan of Action—a landmark 2015 nuclear deal between Iran and six world powers.

Trump has adamantly pursued undermining the deal, which limits parts of Tehran’s peaceful nuclear program in exchange for lifting all nuclear-related sanctions.

“This is nothing but another desperate attempt by the US administration to escape forward, as it has lost every shred of moral, political and legal authority and credibility in the eyes of the whole world,” Iran's envoy said at the meeting.

Khoshroo also reminded council members such as the UK, France and the US of their long record in cracking down on protests.

He referred to Saudi Arabia’s ongoing war against Yemen and Israel’s occupation of Palestine as some of the “genuine issues” that the council should be focusing on instead.

Iranian Foreign Minister Javad Zarif also posted a tweet in reaction to the meeting, calling it another "blunder" for the US foreign policy.

The UNSC rebuffed the US' naked attempt to hijack its mandate. Majority emphasized the need to fully implement the JCPOA and to refrain from interfering in internal affairs of others. Another FP blunder for the Trump administration. Iran's statement: https://t.co/QsbihBW69V

Also speaking at the meeting was Russia’s UN Ambassador Vasily Nebenzia, who accused Washington of trying to bend the UNSC mandate by supporting the unrest in Iran.

“We obviously regret the loss of lives as a result of the demonstrations that were not so peaceful. However, let Iran deal with its own problems, especially since this is precisely what’s taking place,” he said.

The Russian envoy then pointed to Washington’s handling of protests over widespread police killings of unarmed African Americans and crackdown on other social justice movements.

"If we follow your logic, then we should have meetings of the Security Council after the events in Ferguson or after the dispersal by force of the Occupy Wall Street movement in Manhattan.”

“You are dispersing the energy of the Security Council, instead of focusing it on dealing with key crisis situations in Afghanistan, Syria Libya, Iraq, Yemen, the DPRK (Democratic People's Republic of Korea), [and] the African continent. Instead of that, you are proposing that we interfere in the internal affairs of a state," Nebenzia added.

China's Deputy UN Ambassador Wu Haitao also took a similar line, saying the protests were a "domestic issue" of Iran and discussing them at the council "does not help resolve" them.