Maduro says his patience with US has run out

TEHRAN, January 6 - Venezuela’s President Nicolas Maduro has censured United States sanctions on four former and current Venezuelan government officials, warning that the incumbent US president and his administration in Washington has “exhausted his patience.” 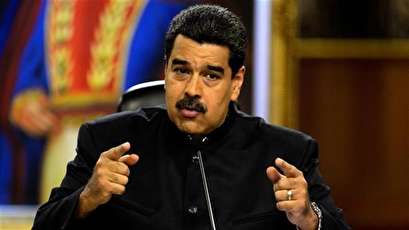 Maduro’s condemnation came in a televised speech on Friday after the US Treasury imposed sanctions on a commander in the Venezuelan national armed forces, a state minister, and two governors.

“My patience is at the limit with the imperialist government of Donald Trump. I am not going to accept any more from this aggressive government,” he said.

Maduro also authorized Venezuela’s military to respond in writing “with forcefulness” to what he characterized as “blackmail” from the White House.

The Treasury Department had earlier claimed that the four officials were either involved in repressing protesters or tied up in major corruption schemes.

The action freezes any assets they have under US jurisdiction, and prohibits Americans and US firms from dealing with them, according to a statement released by the department.

Reacting to the US measure, Venezuelan Foreign Minister Jorge Arreaza said in a Twitter post that his country’s military would not cave in to pressure from Washington.

The army “will never bow to any foreign power, much less to the imperialist and warlike forces of Donald Trump’s supremacist government. We demand respect,” Arreaza wrote, referring to the US president.

The US has already imposed a series of sanctions against the Venezuelan government and in support of the opposition. Last year, Trump slapped bans on Maduro, labeling him “a dictator who disregards the will of the Venezuelan people.”

Venezuela plunged into political unrest in 2016 amid opposition protests and violence, which killed at least 125 from both the government and opposition camps.

Maduro has censured the opposition for attempting to launch a “coup” against the government with the help of the US and its other foreign backers.