TEHRAN, January 7- The main plotters of recent scattered riots in some Iranian towns and cities have been identified and arrested, a police spokesman says. 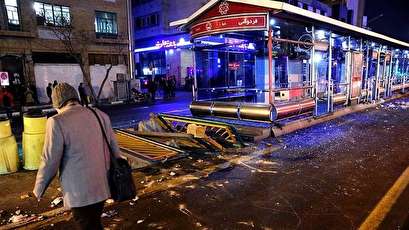 TEHRAN, Young Journalists Club (YJC) - The main plotters of recent scattered riots in some Iranian towns and cities have been identified and arrested, a police spokesman says.

General Saeed Montazer-al-Mahdi said on Sunday that a few "deceived elements" and "rioters" who breached the country's security and damaged private and public property had been taken care of and the agitation was over.

"The people and protesters who had rightful demands were separated in the minimum time possible from the organizers and those directing [the riots] and the violators were identified and arrested," he said.
Among the detainees, he said, are those who disrespected Iran's national flag and steered a fire engine into the crowd of people in the western city of Doroud, killing a father and his son.

A total of 20 people, including a police officer, lost their lives in the violence, he said.

Those detained were handed over to judicial authorities who have released most of them, only holding the main culprits and saboteurs.

The deaths came last week after some Iranian towns and cities were hit by scattered riots, which followed a series of peaceful demonstrations over economic issues.

Leader of the Islamic Revolution Ayatollah Seyyed Ali Khamenei said the enemies were using various means to harm the Iranian nation and the Islamic establishment.

The US and Israel cheered the riots from the very beginning, sparking anger among many Iranians who have taken to the streets over the past few days to reiterate support for the Islamic establishment and repudiate the unrest.

A US bid to take the issue to the UN backfired on Friday as council members dismissed it "a domestic issue that did not fall under the mandate of the Security Council."