TEHRAN, January 8 -Germany's powerful metalworkers union has called for mass strikes from Monday over pay and working hours that could impact a key industry and the shape of labor nationwide. 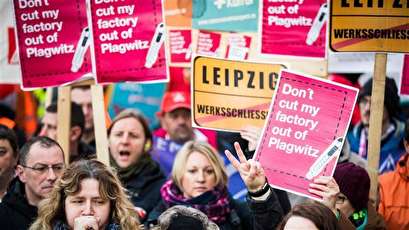 TEHRAN, Young Journalists Club (YJC) -Germany's powerful metalworkers union has called for mass strikes from Monday over pay and working hours that could impact a key industry and the shape of labor nationwide.

IG Metall aren't just asking for a pay rise but also demanding the right for workers to temporarily switch to a 28-hour week to care for children or elderly relatives.

Employers say such a drastic change would be illegal and have threatened to go to court to stop the industrial action.

If the two sides can't agree on the terms of the negotiation by late January, the stage could be set for longer, more damaging walkouts.

So-called "warning strikes" are a familiar feature of the annual collective bargaining process, with workers downing tools for a few hours to demonstrate at factory gates and in town squares.

But there has been no nationwide, open-ended strike in Germany since 2003.

IG Metall expects up to 700,000 to participate in the ritual, running for at least a week from Monday.

Strikes will stretch from Germany's "rust belt" in western North Rhine-Westphalia state to Brandenburg, Saxony and Berlin in the former communist east and the hyper-modern car factories of southwestern Baden-Wuerttemberg.

Boasting some 2.3 million members, IG Metall is Europe's largest trade union, representing workers of all kinds in industrial conglomerates like Siemens or Thyssenkrupp, steelmaking, the auto industry, electronics and textiles.

The sheer weight of the metal and electrical industries' 3.9 million workers often draws other sectors along in its wake when it comes to pay deals -- and 2018's showdown could make for massive changes.

Unions are demanding a pay rise of 6 percent this year.

While the figure is triple the bosses' initial offer of 2 percent, it is a classic starting position to wring out a compromise.

But some employee leaders are outraged at the response to their other headline demand -- the right for workers to switch from 35 to 28 hours per week for up to two years, with the employer paying some of the salary shortfall and guaranteeing the right to return to full-time work.

Employers fear up to two-thirds of workers could be eligible, leaving factory floors bare and prompting a new administrative tangle.

The Gesamtmetall employers' federation blasted the demands and any industrial action workers take to achieve them as outright "illegal," threatening to take the question to court.