TEHRAN, January 8 -All eyes are on the two Koreas as the approaching Winter Olympics provides a perfect opportunity for the two unfriendly neighbors to engage in some fence mending. 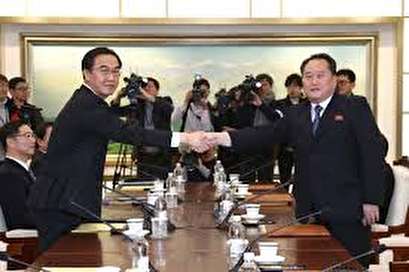 TEHRAN, Young Journalists Club (YJC) -All eyes are on the two Koreas as the approaching Winter Olympics provides a perfect opportunity for the two unfriendly neighbors to engage in some fence mending.

Preliminary reports suggest North Korea has said it will send a delegation of high-ranking officials, athletes, and a cheering squad to the Pyeongchang games in the South next month.

Representatives from North and South Koreas began direct talks on Tuesday, in the first instance of face-to-face dialog in more than two years.

The fresh talks were being held behind closed doors at the Peace House in the Joint Security Area in the truce village of Panmunjom, at the demilitarized zone (DMZ) between the divided countries.

Chun said Seoul proposed that the two sides hold inter-Korean talks on how to reduce military tensions on the Korean Peninsula and the reunion of separated family members in time for the Lunar New Year holiday in February.

He did not provide specifics.

However, a series of overtures between the two Koreas began when North Korean leader Kim Jong-un used his annual New Year address to express interest in dialog with the South as well as in North Korean participation in the Winter Olympic Games, to be held in the South Korean city of Pyeongchang from February 9 to 25.

South Korea quickly responded by proposing high-level talks with the North on January 9 — today — which Pyongyang subsequently agreed to.

Kim also ordered that a telephone hotline between the two Koreas that had been suspended in 2016 be reopened.

The last high-level talks between the two neighbors was held in December 2015 to ease border tensions but ended without any agreement.

Russia and China, which are viewed as allies of North Korea, have welcomed the new negotiations.