TEHRAN, January 9 - Leader of the Islamic Revolution Ayatollah Seyyed Ali Khamenei says a “triangle” of enemies -- with the United States and Israel comprising one of its sides, a rich Persian Gulf littoral state on its second side and the anti-Iran MKO terror organization on the third side -- has been plotting for the past few months to foment chaos and violence in Iran. 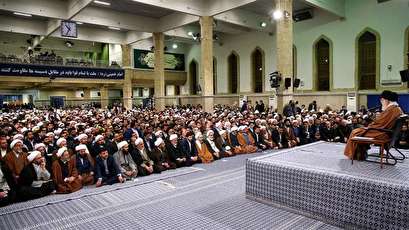 TEHRAN, Young Journalists Club (YJC) - Ayatollah Khamenei made the remarks on Tuesday in a meeting with a large group of people from Qom, in commemoration of the 40th anniversary of the January 9, 1978 uprising in the holy city against the despotic monarchical rulers of the time.

“The plot has been hatched by Americans and Zionists. They have been working on it for several months, planning to begin from small towns and then move on towards the center. The cash comes from one of the filthy rich Persian Gulf littoral states. Obviously, such projects need money, but the Americans won't be willing to spend anything as long as they have these [rich allies],” the Leader said. The third side of the triangle, Ayatollah Khamenei added, was the "murderous" Mujahedin-e Khalq Organization, whose elements served as their lackeys on the ground.

The people, however, distanced themselves from rioters after finding out their motives, the Leader said.

Ayatollah Khamenei described the recent wave of violence that hit some areas of the country as “fireworks and vicious acts,” praising the Iranian people's timely and appropriate reaction to the unrest.

“These are not normal incidents. [These incidents] occur nowhere in the world,” the Leader said, in an apparent reference to the people's massive show of support for the establishment.

Ayatollah Khamenei also noted that the US is angry with the Iranian nation, establishment and the Islamic Revolution due to the blows it has taken from this great movement.

The Leader further noted that people’s honest and rightful demands should be differentiated from acts of violence and sabotage.