TEHRAN, January 9 - At least seven people, including five police officers, have been killed and nearly two dozen others wounded in a bomb blast that struck a police vehicle in southwestern Pakistan. 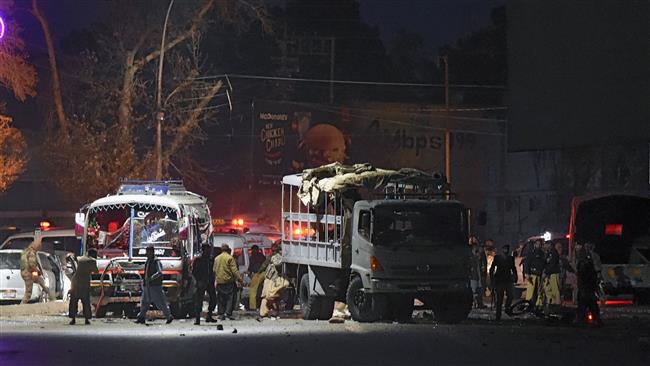 TEHRAN, Young Journalists Club (YJC) - The terrorist attack was carried out in the vicinity of a high security area in Quetta, the capital of Balochistan province, on Tuesday evening.

Senior police officer Abdul Razzaq Cheema said a bomber was believed to have walked up to the truck and blown himself up.
Hospital sources said two civilians were also among the dead.

No group or individual has claimed responsibility for the attack, which came days after two bombers stormed a packed Christian church in Quetta, killing nine people and wounding over 50. The Daesh Takfiri terrorist group claimed the church assault.

Balochistan has long been plagued by an insurgency by nationalist and separatist groups who seek to secure bigger shares in regional resources. The resulted chaos, coupled by lack of security, has made room for the activities of criminal gangs, human smugglers and terror outfits linked to the Taliban and al-Qaeda militant groups.

In a separate development, Balochistan's chief minister resigned amid opposition efforts to remove him through a vote of no confidence. Nawab Sanaullah Zehri, a member of the ruling Pakistan Muslim League-Nawaz (PML-N), quit shortly before a provincial assembly session in which lawmakers were expected to table a motion to demand a vote to oust him.

Achakza said Zehri had vowed to fight political opponents to the end but resigned to "bring an end to instability" in the province.

Mir Abdul Qudoos Bezenjo, a former deputy speaker of the provincial assembly and one of the main instigators behind Zehri's removal, said lawmakers sought to oust Zehri because of his "massive corruption" and "ignoring coalition partners" in his administration. Zehri has rejected the accusations of corruption.