AEOI Chief Warns EU Not to Follow US in JCPOA Violation

TEHRAN, January10 -Head of the Atomic Energy Organization of Iran (AEOI) ALI Akbar Salehi urged the European countries not to step in the footsteps of US President Donald Trump in violating the 2015 nuclear deal, warning that any opposition will harm the Joint Comprehensive Plan of Action (JCPOA). 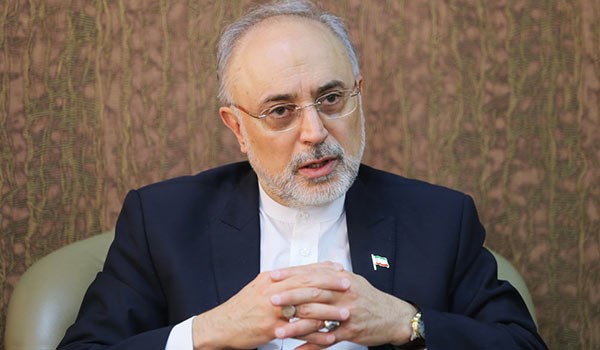 TEHRAN, Young Journalists Club (YJC) - Head of the Atomic Energy Organization of Iran (AEOI) ALI Akbar Salehi urged the European countries not to step in the footsteps of US President Donald Trump in violating the 2015 nuclear deal, warning that any opposition will harm the Joint Comprehensive Plan of Action (JCPOA).

"In view of your experiences with respect to the first round of nuclear talks between three European countries and Iran, you are well aware that lack of agreement with Iran, as was the case in the past, will certainly not benefit you,” Salehi said during a meeting with former British foreign secretary, Jack Straw, on Tuesday.

He said Trump's mental instability has created many problems, adding that the Islamic Republic would take necessary steps in line with its interests if the US president decides to withdraw from the nuclear accord, known as the Joint Comprehensive Plan of Action (JCPOA), reached between Iran and the Group 5+1 (the US, Russia, China, France and Britain plus Germany).

The US president delivered an anti-Iran speech on October 13, 2017, in which he said he would not continue to certify Iran’s compliance with the terms of the JCPOA, a central foreign policy achievement of his predecessor, Barack Obama, and warned that he might ultimately terminate the agreement.

Iranian Deputy Foreign Minister Abbas Araqchi warned on Monday about possible withdrawal of the United States from the landmark nuclear deal and said, "The US president has taken many actions over the past year to destroy the JCPOA and it is even possible that the JCPOA would be dismantled in the next few days through measures he seeks to take."

In a phone conversation with Director General of the International Atomic Energy Agency (IAEA) Yukiya Amano on Monday, the AEOI head said the Islamic Republic may reconsider its cooperation with the UN nuclear agency in case of a US non-compliance with the JCPOA.