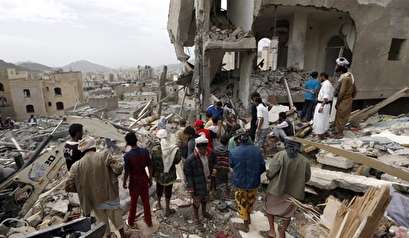 The victims were killed as Saudi military fighter jet targeted trucks loaded with coal travelling along a road linking al-Najibiyah district and Hays region in the neighboring coastal province of al-Hudaydah on Tuesday afternoon, according to Arabic-language al-Masirah television network.

Five employees were also killed on Monday evening when the Saudi coalition bomber launched a strike on Fishery Wealth office in Hudaydah port, according to local sources.

Saudi Arabia has been striking Yemen since March 2015 to restore power to fugitive President Mansour Hadi, a close ally of Riyadh. The Saudi-led aggression has so far killed at least 15,500 Yemenis, including hundreds of women and children.

Despite Riyadh's claims that it is bombing the positions of the Ansarullah fighters, Saudi bombers are flattening residential areas and civilian infrastructures.

The World Health Organisation has also reported that almost 500 cases of diphtheria are suspected in Yemen.

The cholera outbreak in Yemen which began in April, has also claimed over 2,200 lives and has infected about one million people, as the nation has been suffering from what the World Health Organization (WHO) describes as the “largest epidemic in the world” amid a non-stop bombing campaign led by Saudi Arabia.

Also Riyadh's deadly campaign prevented the patients from traveling abroad for treatment and blocked the entry of medicine into the war-torn country.