TEHRAN, January 10 - An Iranian company whose oil tanker is still burning after off the coast of eastern China after a collision last week says there it is hopeful some survivors would be found as 31 crew members remain missing and rescue efforts still continue. 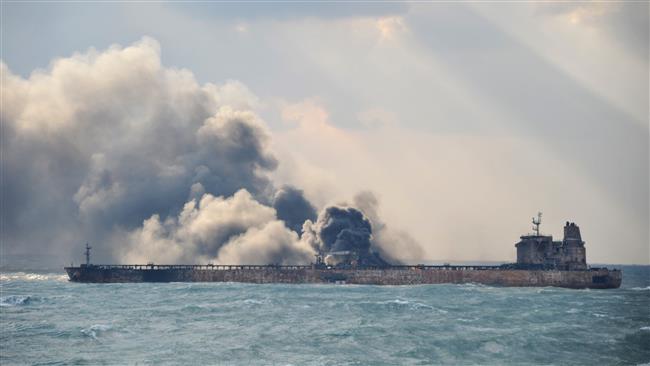 TEHRAN, Young Journalists Club (YJC) - Mohsen Bahrami, a spokesman for National Iranian Tanker Company (NITC), was quoted by media as saying that survivors could be trapped in the engine room of Sanchi which collided with the Hong Kong-registered freighter CF Crystal late Saturday.

"Since the vessel's engine room is not directly affected by the fire and is about 14 meters (46 feet) under water, there is still hope," Bahrami was quoted as saying by The Associate d Press. "We are persistently working to put out the fire and rescue possible survivors."

The body of one of the 32 crew members has been recovered and taken to Shanghai for identification, Bahrami said.

The Panamanian-registered Sanchin had a crew of 30 Iranians and two Bangladeshis, Chinese state media reported. The 21 members of the Crystal's all-Chinese crew were rescued, the AP added in its report.

What caused Saturday's collision in the East China Sea, 257 kilometers (160 miles) off the coast of Shanghai, remains unclear.

The Sanchi was carrying 136,000 metric tons (150,000 tons, or nearly 1 million barrels) of condensate, a type of ultra-light oil, according to Chinese authorities as reported by the AP.

Cleanup and rescue ships have faced toxic fumes, rain and windy conditions as they scrambled to find survivors and avoid a massive oil slick since Saturday's incident.

Thirteen vessels are still searching for missing crew members within 900 square nautical miles of the tanker, according to various reports.