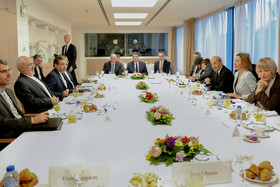 The talks mainly focus on bilateral and multilateral ties, the nuclear deal, known as the Joint Comprehensive Plan of Action (JCPOA) and its upcoming developments.

Zarif arrived in Moscow on Wednesday. He had a meeting with his Russian counterpart Sergei Lavrov where Zarif stressed that continuous implementation of the nuclear deal needs US compliance with its commitments to the deal.

He also called for close coordination and consultations to seriously pursue the nuclear deal.