TEHRAN, January 12 -The secretary general of the Palestine Liberation Organization (PLO) has lashed out at US President Donald Trump for giving a green light to accelerated Israeli settlement activities by recognizing Jerusalem al-Quds as the regime's capital. 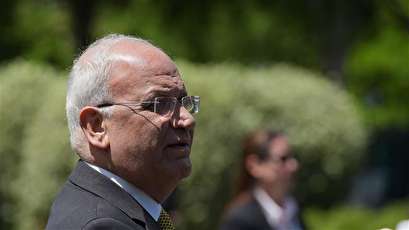 TEHRAN, Young Journalists Club (YJC) -The secretary general of the Palestine Liberation Organization (PLO) has lashed out at US President Donald Trump for giving a green light to accelerated Israeli settlement activities by recognizing Jerusalem al-Quds as the regime's capital.

“President Trump’s decision to recognize Jerusalem as Israel’s capital did not only disqualify the US from playing any constructive role towards achieving peace, but it provided the extremist Israeli government with an opportunity and a green light to speed up their plans of the disposition of the Palestinian people,” Saeb Erekat said on Thursday.

Erekat pointed to planned meetings of the Palestinian leadership on Sunday and Monday to formulate a response to Trump’s Jerusalem al-Quds decision and "discuss several recommendations toward holding Israel accountable to advance with the realization of the inalienable rights of the Palestinian people.”

The approvals were given on Wednesday by a military affairs committee responsible for authorizing settlement construction.

Meanwhile, the European Union condemned the settlement approvals as “further jeopardizing the prospect of a contiguous and viable future Palestinian state.”

“The European Union’s position on Israeli settlement construction and related activities is clear and has not changed: all settlement activity is illegal under international law, and it undermines the viability of the two-state solution and the prospects for a lasting peace. The EU expects the Israeli authorities to reconsider and reverse these decisions,” an EU spokesperson said in a Thursday statement.

The UN special coordinator for the Middle East peace process, Nickolay Mladenov, also condemned the new settlement approvals as an obstacle to peace.

“In the aftermath of the decision to advance over 1,000 housing units in the occupied West Bank, I reiterate that Israeli settlement construction is illegal under international law and is one of the major obstacles to peace. I urge the Israeli authorities to cease and reverse such actions,” Mladenov said in a statement.

“Settlement-related activities undermine the chances for the establishment of a viable, contiguous Palestinian state as part of a negotiated two-state solution,” he added.

The Israeli minister of military affairs, Avigdor Lieberman, said Tuesday he would present for approval a plan to build 1,285 housing units in West Bank settlements this year.

Wednesday’s approvals came just days after Israeli Prime Minister Benjamin Netanyahu’s Likud party voted for a resolution that calls for the formal annexation of parts of the occupied West Bank.

A few days earlier, the Israeli cabinet approved $11 million in funding for settlement activities in the West Bank.

Tel Aviv has stepped up its land grab policies since January 2016, when Trump took office.

Less than a month before Trump took office, the United Nations Security Council adopted Resolution 2334, calling on Israel to “immediately and completely cease all settlement activities in the occupied Palestinian territories, including East Jerusalem” al-Quds.

Much of the international community regards the Israeli settlements as illegal because the territories were captured by Israel in the 1967 Six-Day War and are hence subject to the Geneva Conventions, which forbid construction on occupied lands.

The last round of talks between Israelis and Palestinians collapsed in 2014. Tel Aviv’s settlement activities and its refusal to release senior Palestinian prisoners were among major reasons behind the failure of the negotiations.