Korea talks ease war fears in Washington, but for how long?

TEHRAN, January 12 - Talks between North and South Korea ahead of next month’s Winter Olympics have eased fears of war over Pyongyang’s development of nuclear missiles capable of hitting the United States - at least for now. 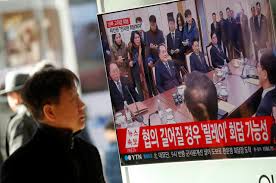 TEHRAN, Young Journalists Club (YJC) - Talks between North and South Korea ahead of next month’s Winter Olympics have eased fears of war over Pyongyang’s development of nuclear missiles capable of hitting the United States - at least for now.

But North Korean leader Kim Jong Un has shown no sign of willingness to give in to U.S. demands and negotiate away a weapons program he sees as vital to his survival, so any reduction in tensions could prove shortlived.

Rhetoric on all sides may have moderated as a result of the first round of intra-Korean talks in more than two years on Tuesday, but U.S. officials say hawks in President Donald Trump’s administration, up to and including Trump himself, remain pessimistic that they will lead anywhere.

In recent days, in a series of media leaks, U.S. officials have spoken of the president’s willingness to consider a limited preemptive strike on North Korea to change Kim’s mindset, despite the risk of touching off a war.

But there are divisions within the administration.

National security adviser H.R. McMaster has been the most vocal of Trump’s aides arguing for a more active military approach, while Secretary of State Rex Tillerson, Defense Secretary Jim Mattis and the military leadership have urged caution, stressing the need to exhaust diplomatic options, according to five officials who spoke on condition of anonymity.

A White House National Security Council official said the administration was “constantly developing a range of options, both military and non-military” but declined to address any differences between senior aides.

The Pentagon declined comment on internal discussions, though one spokesman said Mattis had stressed in public that the effort to confront the North Korean crisis was diplomatically led. The State Department referred to Tillerson’s statements on the need to pursue diplomacy backed by strong military options.

According to the narrative put forth by those advocating a tougher response, a strike could be limited to a single target with the aim of making Kim see reason, not to topple his government, something North Korea’s neighbor and only major ally, China, would not countenance, the officials said.

“Trump is convinced the only thing Kim understands and respects is a punch in the face, which he thinks no previous administration has had the guts to do,” one U.S. official said.

“At a minimum, he thinks that warning the Chinese about a preemptive strike would motivate Beijing to force Kim to shut down the programs that threaten the U.S.,” the official said.

It remains unclear whether these disclosures by people close to the internal deliberations were simply psychological warfare aimed at sowing strategy-changing fear within the North Korean leadership or reflected Trump’s serious intent.However, the administration’s debate on whether to put greater emphasis on strike plans has slowed because of the North-South contacts and February’s Winter Olympics to be hosted by South Korea. Pyongyang said it would send a delegation.

Some U.S. officials have suggested that North Korea was using diplomatic overtures to try to drive a wedge between Washington and ally Seoul and did not intend to engage seriously. The South and the United States are technically still at war with the North because the 1950-53 Korean War ended with a truce, not a peace treaty.

‘WHO KNOWS WHERE IT LEADS?’

Trump’s public response to the intra-Korean meeting has been mostly positive though at times tinged with skepticism.

“Who knows where it leads?” he told reporters on Wednesday after discussing the talks with South Korean President Moon Jae-in, a long-time advocate of dialogue with Pyongyang and whose capital Seoul could be devastated in any major conflict.

Trump, who has exchanged insults and threats with Kim in recent months, was quoted on Thursday as telling the Wall Street Journal in an interview: “I probably have a very good relationship with Kim Jong Un.” Trump offered no details and asked whether he had spoken with Kim, said: “I don’t want to comment on it. I‘m not saying I have or I haven‘t.”

The administration had been due to hold a Cabinet-level meeting this week to sharpen its economic and military options for dealing with North Korea.

But officials say this discussion has been postponed until after the Paralympic Games, which follow the Olympics and end in March, given the intra-Korean talks and a planned 20-country meeting on North Korea hosted by Canada next week.

The officials said McMaster has argued that if China were assured that a strike would be limited to one target and not the beginning of a campaign to overthrow Kim, an all-out war could be avoided.

However, Zhao Tong, a North Korea expert at the Carnegie-Tsinghua Center in Beijing, said China’s attitude might change if North Korea launched a nuclear-tipped ICBM into the Pacific Ocean or fired missiles toward Guam.

China sees the Trump administration’s discussion of military options as a psychological game to force Beijing and Moscow to maintain pressure on Pyongyang, but they were making crisis preparations just in case, Zhao said.

“Even if Trump is not really serious about a military strike, there is always the risk of miscalculation or an over-reaction from North Korea,” Zhao said.