TEHRAN, January 12 - US President Donald Trump is expected to announce whether or not he will certify Iranian compliance with a 2015 international nuclear deal on Friday — a deadline he faces under domestic US law — amid warnings by other signatories to the deal for Washington not to undermine the international document. 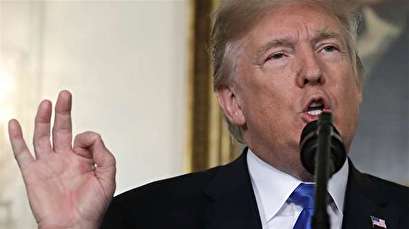 TEHRAN, Young Journalists Club (YJC) - Various reports citing sources familiar with the president’s decision have said he will certify Iranian compliance by the Friday deadline, allowing Congress to continue to waive sanctions under the deal while introducing new sanctions of his own.

On Friday, Reuters cited a person familiar with the decision as saying that the US president would extend the sanctions relief, leaving the accord intact for now.

He is, however, expected to give Congress and the Europeans a deadline to “improve” the JCPOA, which he had vowed to scrap, or Washington would pull of the accord, according to the source.

An Associated Press report had also said some of those new sanctions “could hit some firms and individuals whose sanctions were scrapped under the 2015 nuclear agreement.”

If any of the sanctions terminated under the deal are potentially re-imposed, a violation of the agreement will have occurred.

AP did not elaborate on the nature of the new restrictions but said they could allow the Trump administration to increase pressure on Iran “while not embarking on a frontal assault on the most central trade-offs of the nuclear agreement.”

Both on his presidential campaign trail and ever since taking office, he has been threatening to “tear up” the 2015 nuclear agreement between Iran and world countries, including the US itself, which obliged the White House to relieve the sanctions.

That attitude has prompted far-and-wide criticism from the pact’s other signatories -- the UK, France, Russia, China, and Germany -- which argue that the multilateral deal is an international document, which cannot be scrapped by any single party.

Those cautioning Trump contend that the agreement, which lifted all such sanctions against Tehran in exchange for limits on its nuclear energy program, is a triumph of diplomacy and a pillar of regional and international peace.

On Thursday, the European Union’s foreign policy chief, Federica Mogherini together with foreign ministers of France, the US and Germany delivered a strong defense of the deal in separate statements, which were issued following a meeting with Iranian Foreign Minister Mohammad Javad Zarif in Brussels.

Trump took his yet most audacious action aimed at harming the deal last October, when he refused to certify Iran’s commitment to the deal as he is periodically tasked by Congress to do.

The refusal came despite numerous reports by the UN nuclear watchdog, the International Atomic Energy Agency, confirming Iran’s full compliance with the accord.

The Trump administration has so far imposed several rounds of bans trying to target Iran’s missile program, which Washington claims violates the “spirit” of the JCPOA.

Tehran says its missiles are not designed to carry a nuclear warhead and thus its missile work is not in violation of the deal.

The other parties to the JCPOA have warned the US not to link irrelevant issues to the nuclear accord.