Haitians proud on day of quake memorial, after Trump comments

TEHRAN, January 13 - Haitians on Friday pushed back at U.S. President Donald Trump’s reported description of the Caribbean country as a “shithole,” instead celebrating a history of slave revolution and resilience on the eighth anniversary of a devastating earthquake. 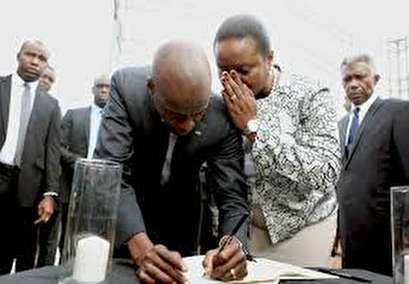 TEHRAN, Young Journalists Club (YJC) - Haitians on Friday pushed back at U.S. President Donald Trump’s reported description of the Caribbean country as a “shithole,” instead celebrating a history of slave revolution and resilience on the eighth anniversary of a devastating earthquake.

The government said Trump should apologize if he made such comments, and summoned the top U.S. diplomat in the country for an explanation.

“Mr Trump may say what he pleases, but I am proud of being Haitian. If someone should be ashamed it should be Trump,” said Michel Aubry, 38, who lost his left foot when his house collapsed during the 2010 earthquake.

“We are the ones who defeated slavery and freed ourselves in 1804,” Aubry said, remarking that until the 1960s black people in the United States were subject to legal segregation from whites.

Aubry was speaking outside the remains of Haiti’s National Palace, where President Jovenel Moise on Friday laid the first stone to rebuild the emblematic building that collapsed in the quake.

Haiti’s ambassador to Washington, Paul Altidor, said it was distressing that attention was drawn to the comments on the anniversary and day of remembrance for about 220,000 people killed on the island by the quake.

“Haitians don’t deserve such treatment,” Altidor said. “Haitians should not be seen as a bunch of immigrants who come to the United States to exploit U.S. resources.”

Altidor said the U.S. chargé d’affaires in Haiti had been summoned to explain the reported comments.

Trump on Thursday questioned why the United States would want to have immigrants from Haiti and African nations, referring to some as “shithole countries” during a briefing on draft immigration legislation, according to two sources familiar with the comments.

The United States should seek immigrants from Norway instead, he reportedly said.

On Friday, the Republican president denied making the vulgar referenced during the meeting.

“Other than Haiti is, obviously, a very poor and troubled country,” he posted on Twitter. “I have a wonderful relationship with Haitians.”

The storm over Trump’s alleged language follows a New York Times story last year about a meeting in which Trump allegedly said Haitian immigrants “all have AIDS.” The White House later denied he used the word AIDS to describe Haitians.

The U.S. embassy in Haiti, in a Twitter post on Friday, said “we remember and honor the many lives lost 8 years ago in Haiti”.