TEHRAN, January 13 - Iran's minister of cooperatives, labor and social welfare said Iranian and Chinese commandos are heading towards the area where an Iranian oil tanker caught fire and is still ablaze following a collision in the East China Sea. 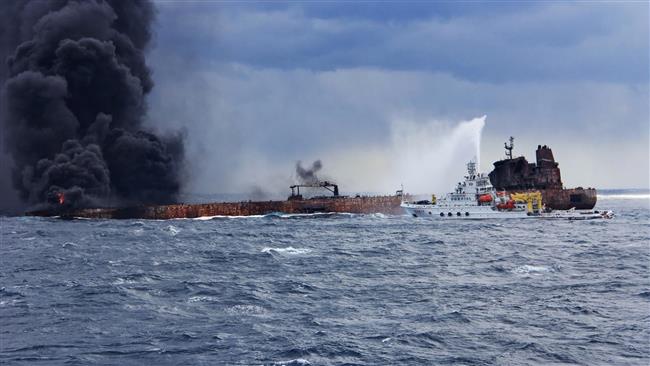 TEHRAN, Young Journalists Club (YJC) - Ali Rabiei, head of an ad hoc committee tasked with following up on the condition of the tanker and its crew, said on Saturday that the Iranian and Chinese commandos would reach the area on Sunday morning local time.

He added that many ambiguities surrounding the incident would be resolved after the arrival of the Iranian and Chinese teams.

Pointing to operations to extinguish the blaze, he said two Japanese fireboats had arrived in the region while Tokyo has announced that it would dispatch two more boats.

Iran has also hired three fireboats to put out the fire, Rabiei said, adding that they had been deployed in the area. Three other ships are also hired by Iran for logistic support, he said.

Also on Saturday, the foreign ministers of Iran and China discussed the latest developments surrounding the stricken Iranian oil tanker.

Mohammad Javad Zarif and his Chinese counterpart Wang Yi held a phone conversation after Chinese rescuers recovered two bodies and the "black box" from the tanker.

The top Chinese diplomat said his country's salvage team would make its utmost effort to extinguish the blaze.

The bodies were discovered on the deck of the Panamanian-registered Sanchi oil tanker Saturday morning by the four-member rescue team wearing respirators.

The collision occurred between the Sanchi tanker and the huge Hong Kong bulk freighter, CF Crystal, 160 nautical miles east of Shanghai in the East China Sea on January 6.

The tanker, which was carrying 136,000 tonnes of condensate for South Korea, has been in flames since the collision.

Reports said 30 Iranian and two Bangladeshi sailors went missing after the collision. A total of three bodies have so far been recovered while the remaining sailors are still missing.