TEHRAN, January 14 -US President Donald Trump’s administration intends to develop new nuclear firepower that it says will make it easier to deter Russian threats to its European allies, further claiming that it aims to make nuclear conflict less likely. 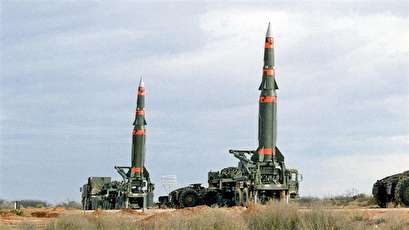 The proposal, not yet signed by Trump, is explained in a policy document – officially known as a “nuclear posture review” – that places the US “in a generally more aggressive nuclear stance,” AP reported in a Saturday dispatch.

According to the report, the Trump nuclear doctrine is expected to be released in early February, followed by a related policy on the role and development of US defenses against ballistic missiles.

It will be “the first review of its kind since 2010 and is among several studies of security strategy undertaken since Trump took office,” the report adds.

In many ways it reaffirms the nuclear policy of previous president Barack Obama, including his pledge to replace all major elements of the US nuclear arsenal with new, more modern armaments over the next two decades.

The report notes, however, that Trump’s doctrine differs from Obama’s approach by aiming to end his efforts to reduce the role of nuclear arms in US military policy.

According to Trump’s doctrine, Washington will adhere to existing arms control accords while expressing doubt about prospects for any new such agreements.

Like Obama, the report adds, Trump would consider using nuclear weapons only in "extreme circumstances," while maintaining “a degree of ambiguity about what that means.”

Moreover, Trump regards such weapons as having a fuller deterrent role, as reflected in the plan to develop new capabilities to counter Russia in Europe.

Authors of the Trump nuclear doctrine, the report says, “argue that adding new US nuclear capabilities to deter Russia in Europe will lessen, not increase, the risk of war.”

They are concerned that the nuclear-capable war planes that are currently the only Europe-based nuclear force to counter Russia have become less credible, partly due to their potential vulnerability to Russian air defenses, thus warranting the focus on adding sea-launched US nuclear weapons to the force.

"This is not intended to, nor does it, enable 'nuclear war-fighting,'" stated the draft document as cited in the report.

Instead, the objective is to make nuclear conflict less likely by ensuring that "potential adversaries" see no possible advantage in escalating a conventional conflict to the nuclear level.

The report goes on to cite Pentagon authorities as describing the document as “pre-decisional” and incomplete, which is yet to be reviewed and approved by Trump, who ordered it a year ago.

The documents points to Russia, as well as China, as nuclear policy problems that demand a tougher approach.

The administration's view is that Russian policies and actions are fraught with potential for miscalculation leading to an uncontrolled escalation of conflict in Europe.

It specifically points to a Russian doctrine known as "escalate to de-escalate," in which Moscow would use or threaten to use smaller-yield nuclear weapons in a limited, conventional conflict in Europe in the belief that doing so would compel the US and NATO to back down.

First, it would modify "a small number" of existing long-range ballistic missiles carried by Trident strategic submarines to fit them with smaller-yield nuclear warheads.

Secondly, "in the longer term," it would develop a nuclear-armed sea-launched cruise missile — re-establishing a weapon that existed during the Cold War but was retired in 2011 by the Obama administration.

Together, these steps are meant to further dissuade "regional aggression," which means “giving Russia greater pause in using limited nuclear strikes,” according to the report.

The Trump administration regards the North Korean threats, along with what it sees as provocative nuclear rhetoric from Russia, as “evidence that security conditions no longer support the idea that the US can rely less on nuclear weapons or further limit their role in national defense,” the report adds.

The nuclear report also makes rare mention of a newer Russian weapon: a nuclear-armed drone torpedo that could travel undersea to far-off targets.