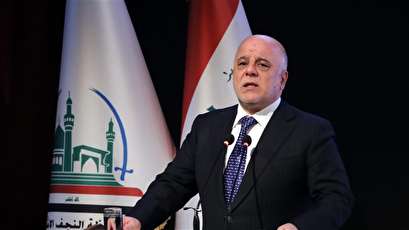 He announced the candidacy in a statement late on Saturday, saying he would be contesting the elections at the head of a “cross-sectarian” list named Victory Alliance.

Abadi said his Victory Alliance will “boost the country’s integrity and national sovereignty, correct mistakes and achieve justice and equality for all Iraqis.”

He said the “miracle of victory and unity must lead to a new and brighter era.”

The cabinet has proposed May 12 for holding the elections. The legislature is yet to endorse the proposal.

Abadi took office in 2014, the same year when the Daesh terror group swept huge expanses of the Arab country in blistering attacks. His incumbency is credited with Baghdad’s finally driving Daesh out late last year.

He is credited for quickly rebuilding the army and liberating all terrorities under Daesh control with the help of Popular Mobilization Units, better known as Hashd al-Shaabi.

His archrival in the competition is Nouri al-Maliki, who held the office for eight years before Abadi.

Maliki announced his candidacy on Saturday, saying he would be running on his State of Law alliance’s ticket. The alliance is the largest political block at the parliament.

Maliki heads the Dawa party, of which Abadi is a member, and is also one of the country’s three vice presidents.

The premier is a Shia Muslim in line with an agreement reached after the ouster of Iraq’s former dictator Saddam Hussein.