TEHRAN, January 14 - Iran’s President Hassan Rouhani said the administration of US President Donald Trump has failed in its attempts to kill the 2015 multilateral nuclear deal, describing this as a “victory” for the Iranian nation and the rule of law. 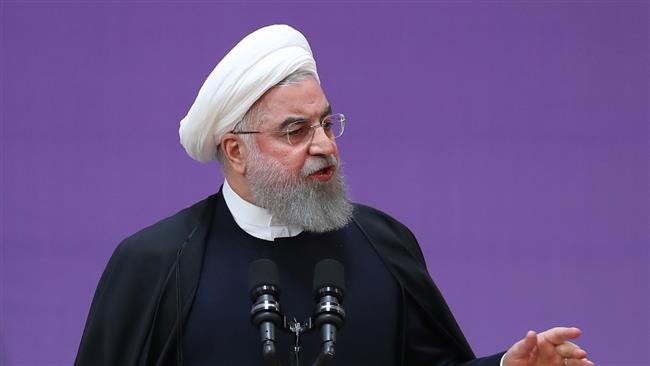 TEHRAN, Young Journalists Club (YJC) - Trump has left no stone unturned over the past year to destroy the agreement, but to no avail, said Rouhani on Sunday, adding, “This means a victory for international commitments and law against dictatorship.”

Rouhani further noted that Americans failed “to step on the world’s public opinion with dictatorship and arrogance, and this is a blow to the US and a success for Iran.”

The Iranian chief executive said the White House had been “unsuccessful” in undermining the international accord, and standing against the Security Council Resolution 2231, which endorsed the nuclear agreement, officially called the Joint Comprehensive Plan of Action (JCPOA).

“We proved that a tight knot could be undone at the negotiating table... that Iran is speaking the truth while the enemies are telling lies, and that we are not seeking to develop nuclear weapons,” he added.

The US president on Friday extended waivers of key economic sanctions on Iran, which were lifted under the JCPOA, for another 120 days but said he was doing so “for the last time.”

Trump called on European allies and Congress to work with him to “fix the disastrous flaws” in the nuclear agreement or face a US exit.

US lost ‘diplomatic battle’ to Iran

Meanwhile,  Iranian deputy foreign minister says Tehran has successfully foiled the US president’s attempts to undermine the 2015 multinational nuclear deal, adding Washington stands fully isolated on the diplomatic stage due to its belligerent stance on the landmark agreement.

During a TV program on Saturday, Abbas Araqchi described the deal as “an international achievement,” saying the document is “non-negotiable” and should be kept intact.

Araqchi, who served as senior negotiator in the talks leading to the JCPOA, further slammed President Donald Trump’s long-running hostile campaign against the deal.

Trump, however, lost the “diplomatic battle” over the nuclear pact to Iran as the Islamic Republic managed to fully isolate the US and separate it from its European allies, the official said.

The US president also said he wanted Congress to pass a bill that states Iran’s long-range missile and nuclear programs are inseparable, and that the country’s development and testing of missiles should be subject to severe sanctions.

Araqchi further said Iran’s conventional missile program “is related to our domestic capabilities and national security and has absolutely nothing to do with any other issue,” emphasizing that it is “not up for either negotiation or compromise.”

The JCPOA, he added, managed to “draw a line” between the missile program and the nuclear issue, saying that no party could now claim that Iran’s missile tests violate the nuclear agreement.

Elsewhere in his remarks, Araqchi stressed that the US and Europe have no right to re-impose the sanctions lifted under the JCPOA under any pretext.

Additionally on Friday, Trump ordered the imposition of new sanctions on 14 Iranian and no-Iranian individuals and entities over alleged rights abuses, censorship, and support for weapons proliferators.

Araqchi said that Washington’s move to add individuals to such a blacklist was “out of desperation and meant to make up for its failures.”

“The Iranian parliament will in no way accept changes to the structure of the nuclear agreement, and the amendments the US president mentioned in his latest remarks amount to the destruction of the whole deal," he said.

Iran’s Foreign Ministry announced on Saturday that Tehran would commit to no obligation beyond those it has already agreed to under the JCPOA.

Prior to the White House’s announcement, the European Union along with three European signatories to the deal, including France, Britain and Germany, once again reaffirmed their strong determination to preserve Iran’s nuclear agreement, warning the US against any attempts to weaken the JCPOA, which widely viewed as a victory for international diplomacy and teamwork.