TEHRAN, January 14 - Iran's President Hassan Rouhani has issued a message of condolences over the death of sailors on board an Iranian oil tanker that sunk after burning for more than a week following a collision in the East China Sea. 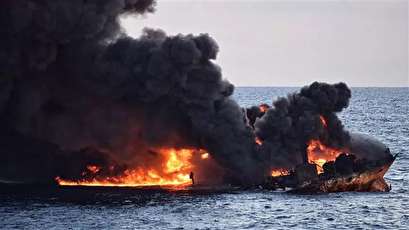 Iranian officials said on Sunday that the vessel had completely sunk and available evidence indicated that all crew members had died soon after the collision and a powerful blast.

A Chinese salvage team on Saturday recovered two bodies from the tanker. Another body, presumed to be one of the Sanchi's sailors, was found on Monday and brought to Shanghai for identification.

In his message on Sunday, Rouhani called on Iranian officials in charge to prioritize the identification of the bodies of the victims and to alleviate the agony of their bereaved families.

The Iranian president also called on authorities to make a thorough investigation into the incident and endeavor to prevent the occurrence of similar accidents. He also called for a necessary legal follow-ups to ensure the rights of the Iranian nation and the victims' families.

On Saturday, Rouhani held a phone call with the Iranian Minister of Cooperatives, Labor and Social Welfare, Ali Rabiei, who is currently in China as the head of an ad hoc committee tasked with following up on the condition of the tanker and its crew.

He called for mobilizing resources and adopting necessary measures to immediately determine the fate of crew members of the oil tanker.

He said all Iranian officials made their utmost efforts over the past week to rescue the brave sailors but the country is currently mourning their loss.

Zarif added that Iran's Foreign Ministry and all the relevant bodies would follow up on the issue through legal channels.