TEHRAN, January 15 -  The Al-Nusra Front (Tahrir al-Sham Hay'at or the Levant Liberation Board) continued to pull forces back from five more regions under the heavy attacks of the Syrian Army troops on Sunday. 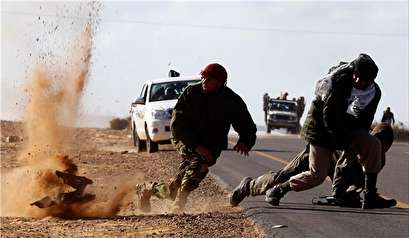 TEHRAN, Young Journalists Club (YJC) - The Al-Nusra Front (Tahrir al-Sham Hay'at or the Levant Liberation Board) continued to pull forces back from five more regions under the heavy attacks of the Syrian Army troops on Sunday.

A military source said that the terrorists will be besieged in a region as large as 1,200 sq-km among the provinces of Hama, Aleppo and Idlib as soon as the army men, operating in Southwestern Aleppo, manage to reach their comrades South of Abu al-Dhohour airbase in Idlib province.

Field sources confirmed on Saturday that the army men in the last round of clashes with Al-Nusra captured the villages of al-Atshanah, al-Salehiyeh, Beit al-Hamadat, al-Jufrah, Wadi al-Hob and Tal al-Sabiyeh near the town of al-Safireh.

The sources said that the army has thus far imposed control over 60 villages and towns following its advances in Southwestern Aleppo in the last four days.

The sources said that the army has started fresh operations South of al-Safireh to access the key Abu al-Dhohour airbase, capturing 26 villages.

The sources further said that the terrorist groups have launched more attacks on the army to slow down their rapid advances and prevent them from laying siege on the militants trapped in a large region expanded from Southern and Southwestern Aleppo up to Southeastern Idlib.