TEHRAN, January 15 -Myanmar is building a camp to temporarily house 30,000 Rohingya Muslims targeted for repatriation after fleeing violence in Rakhine State, state media reported on Monday, as Myanmar and Bangladesh meet to discuss how to implement a repatriation deal. 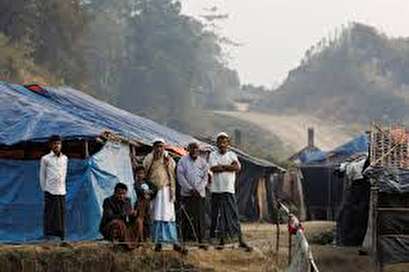 TEHRAN, Young Journalists Club (YJC) -Myanmar is building a camp to temporarily house 30,000 Rohingya Muslims targeted for repatriation after fleeing violence in Rakhine State, state media reported on Monday, as Myanmar and Bangladesh meet to discuss how to implement a repatriation deal.

More than 650,000 Rohingya have headed across the border to Bangladesh after a sweeping Myanmar army counteroffensive in response to Rohingya militant attacks on Aug. 25, 2017.

The crackdown has been described by the United States and U.N. as ethnic cleansing, which Myanmar repeatedly rejects.

Officials from Myanmar and Bangladesh meet on Monday to discuss a repatriation deal signed on Nov. 23. The meeting in Myanmar’s capital, Naypyitaw, is the first for a joint working group set up to hammer out the details of the agreement.

The state-run Global New Light of Myanmar newspaper said a camp in Hla Po Khaung in northern Rakhine will be a temporary transition camp for people who are to be “accepted systematically” for repatriation.

“The 124-acre Hla Po Khaung will accommodate about 30,000 people in its 625 buildings,” the newspaper said, adding that some 100 buildings will be completed by end of January.

Aung Tun Thet, chief coordinator of Myanmar’s Union Enterprises for Humanitarian Assistance, Resettlement and Development, told Reuters that the camp in Hla Po Khaung will be a “transition place” for Rohingya refugees before they are repatriated to their “place of origin” or the nearest settlement to their place of origin.

“We will try to accept all of those who are coming back to Myanmar,” he said, adding that to verify returnees’ residency, they will be sent to assessment camps in Taungpyoletwei or Ngakhuya before they are moved to the Hla Po Khaung camp.

Soe Aung, permanent secretary of Myanmar’s Ministry of Social Welfare, Relief and Resettlement, said returnees will spend “at least one or two months” in Hla Po Khaung before their new homes are built.

Myanmar government officials have said the 1992-1993 repatriation deal, which followed a previous spasm of violence in Myanmar, would accept those who could present identity documents issued to the Rohingya by governments in the past.

Buddhist-majority Myanmar has for years denied Rohingya citizenship, freedom of movement and access to basic services such as healthcare and education. They are considered illegal immigrants from mainly Muslim Bangladesh.

Bangladesh officials have said it was unclear when the first refugees could actually return as the two countries need to work out how to jointly verify the identities of returnees.

United Nations agencies and human rights watchers have voiced scepticism about the resettlement plans and demanded a more transparent process to safeguard the Rohingya’s voluntary return.