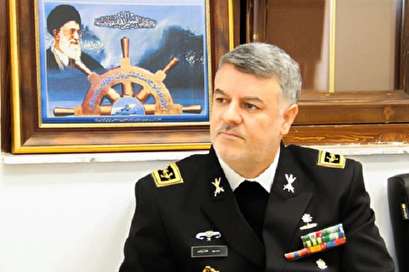 Iran’s Navy Commander Rear Admiral Khanzadi discussed the oil tanker collision and the measures taken with regard to it, saying “the collision occurred more than 8000 mile away from Iran’s sea borders.

In the early days of the collision, we realized that although part of the ship had not caught fire and it was possible to get on board and start rescue operations, no measure were taken which made me think that maybe the Chinese lacked the courage to get on the tanker.”

“For this reason, we recommended to National Iranian Tanker Company and Ports and Maritime Organization to let us dispatch navy commandos to Sanchi tanker in order to carry out rescue missions; China must first, however, prepare the conditions," he explained.

“When we announced our decision to the special forces, many of them volunteered for the mission which indicates that they are prepared to carry out missions anywhere in the world,” he said.

Khanzadi said that dispatching armed forces to another country requires certain official preparations and added “we made our recommendation three days after the collision, and since China had announced that it will not admit armed forces in the area, the situation got more complicated. They announced that Iranian Special Forces must go to the area without their military uniforms. We accepted that our forces go to the area in any clothing the Chinese want.”

He said that after the negotiations with the Chinese navy commander, the Chinese side announced that they will provide Iran with necessary equipment. The process of attaining visas for the forces took three more days, unfortunately.

“On the 7th day, our special forces reached the spot where collision had happened. By that time, however, the tanker had drifted towards Japan’s waters. The forces were dispatched to the new location, but when they were being prepared to go up on the deck, a massive explosion occurred, the whole deck caught fire and the tanker sank to the bottom,” he explained.