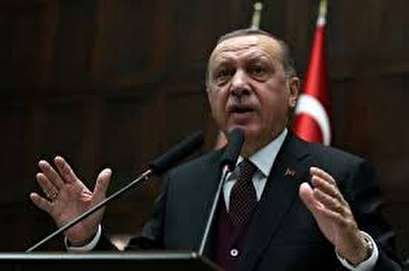 In recent days, Erdogan has repeatedly warned of an imminent incursion in Afrin after the U.S.-led coalition said it was working with the mainly Kurdish YPG-led Syrian Democratic Forces (SDF) to set up a new 30,000-strong border force.

The plan has infuriated Turkey, which considers the YPG as an extension of the Kurdistan Workers’ Party (PKK) militant group, which has fought an insurgency in southeast Turkey since 1984. The PKK is considered a terrorist group by the European Union, Turkey and the United States.

Asked if Syrian rebels would be involved in the operation against Afrin, Erdogan told reporters in parliament: “Of course they will, together. This struggle is being conducted for them. Not for us.”

Speaking at a meeting of NATO top brass in Brussels, armed forces chief General Hulusi Akar said Turkey will not allow the YPG to receive support and said NATO should not differentiate between terrorist groups, state-run Anadolu agency reported.

“We cannot and will not allow support and arming of the YPG terror group under the name of an operational partner. We hope this mistake will be corrected in the shortest time,” Akar was reported as saying.