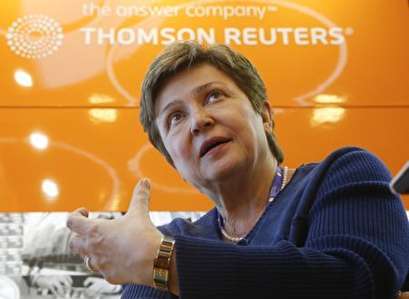 TEHRAN, Young Journalists Club (YJC) - President Vladimir Putin, in power for 18 years, is widely expected to win a further six-year term in the March election and to reshuffle his government.

"What we agree is that the new political cycle opens opportunities for new policy ideas to be brought forward," World Bank CEO Kristalina Georgieva told Reuters in an interview on the sidelines of an economic forum in Moscow.

"The key point is investment in people, in education, in health, in quality of social services. The government recognizes that, (but this is) not yet quite reflected in the share of education and health in GDP," she added.

Earlier on Tuesday Finance Minister Anton Siluanov told the Rossiya 24 TV channel the government was considering an overhaul of the tax system, partly in order to generate more funds for investment in education, healthcare and infrastructure.

Russian state spending on education and health each accounted for less than four percent of national output in 2017, Deputy Prime Minister Olga Golodets said in an interview with Russia's RBC TV last year.

These levels of spending are well below those seen in most Western countries.

Georgieva, a Bulgarian national and a former deputy head of the European Commission, said Russia had successfully reined in once stubbornly high inflation, helping to boost consumer confidence, and adopted a fiscal rule that had reduced its vulnerability to oil price fluctuations.

"The question is, what more Russia can do to lift up growth further?"

The World Bank expects the Russian economy to expand by 1.7 percent this year, when the global economy is seen growing by 3.1 percent. In 2019 the bank sees Russia's economic growth picking up to 1.8 percent.

Georgieva also urged Russia to invest more in new technologies, though it is still under Western economic sanctions over its role in the Ukraine crisis and its economy is still hampered by relatively low global energy prices.

World Bank data shows only 10 percent of Russian companies report innovation playing a significant role in their business in contrast to 30-40 pct in member nations of the Organisation for Economic Co-operation and Development (OECD).

"We believe that Russia can catch up with the world in terms of growth provided that some of these critical public policy shifts and investments are being made," Georgieva said.