TEHRAN, January 17 -US President Donald Trump's former chief strategist, Steve Bannon, has been subpoenaed to testify before a federal grand jury in a probe of alleged ties between Moscow and Washington in the US 2016 presidential campaign. 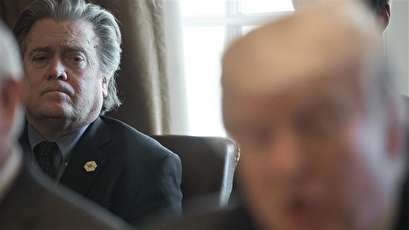 TEHRAN, Young Journalists Club (YJC) -US President Donald Trump's former chief strategist, Steve Bannon, has been subpoenaed to testify before a federal grand jury in a probe of alleged ties between Moscow and Washington in the US 2016 presidential campaign.

The subpoena was issued by US Justice Department's Special Counsel Robert Mueller on Tuesday, after Bannon refused to answer questions from the House Intelligence Committee about his time on the presidential transition and his work in the White House.

Mueller's office declined to comment as it was the first time the counsel, leading the investigation into alleged Russian interference in last year's election, used a subpoena against a member of Trump's inner circle.

Asked if the White House had told Bannon not to answer certain questions, spokeswoman Sarah Huckabee Sanders said, "As with all congressional activities touching upon the White House, Congress must consult with the White House prior to obtaining confidential material."

"We've been cooperating fully with these ongoing investigations and encourage the committees to work with us to find an appropriate accommodation in order to ensure Congress obtains information necessary to its legitimate interests," she added.

US intelligence agencies have concluded that Russia tried to help Trump win the election by hacking and releasing emails damaging to his Democratic opponent, Hillary Clinton. Mueller is looking into whether there were any links between the Trump campaign and Russian operatives.

President Trump and Russia have denied the allegations.

In a recently published book named "Fire and Fury: Inside the Trump White House," the 64-year-old political strategist is quoted as saying that a pre-election meeting between Trump's son and a Russian lawyer was "treasonous" and "unpatriotic."

After Bannon’s comments in the book were disclosed, Trump began calling him “Sloppy Steve” and issued a statement saying he had “lost his mind.”