TEHRAN, January 17 -US Secretary of State Rex Tillerson has threatened North Korea with a military response unless it abandons its nuclear weapons program. 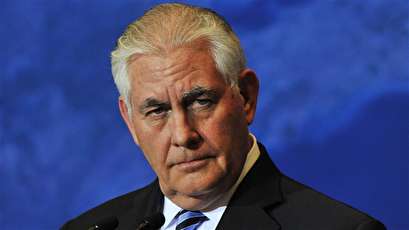 TEHRAN, Young Journalists Club (YJC) -US Secretary of State Rex Tillerson has threatened North Korea with a military response unless it abandons its nuclear weapons program.

The Donald Trump administration does seek a diplomatic resolution to the nuclear standoff, Tillerson said, but noted that Pyongyang has failed so far to show itself to be a "credible negotiating partner."

He made the remarks on Tuesday following a meeting in Vancouver, Canada, with allies on sanctions pressure against Pyongyang.

Tillerson said North Korea has been making significant advances in its nuclear weapons using the thermonuclear test and progress in its intercontinental missile systems.

"We have to recognize that the threat is growing and that if North Korea does not choose the pathway of engagement, discussion, negotiation then they themselves will trigger an option," he stated.

However, he refused to comment on whether the White House is contemplating limited military action against Pyongyang amid reports that some in the administration back military action to give the North a "bloody nose."

"We all need to be very sober and clear-eyed about the current situation," he said when asked whether Americans should be worried about the likelihood of a war.

This comes as the US has moved more warships and aircraft to the Korean Peninsula over the past days, expanding its military presence there as South Korea prepares to host North Korean athletes in Winter Olympics next month.

Washington has welcomed the talks, unnamed officials within the Trump administration said, noting that the increasing US military presence off North Korean territories only represented routine training and scheduled upgrades.

However, North Korea blasted the expansion of the military buildup as an attempt to derail recent talks between the two Koreas.

Meanwhile, the country’s state-run media said Tuesday Trump's tweet about having a bigger nuclear button than leader Kim Jong-un's is the "spasm of a lunatic."