TEHRAN, January 18 -President Donald Trump has announced the “winners” of his “Fake News Awards.” While the link failed to open for many amid the high internet traffic, a web archive reveals the New York Times and CNN are among the top three. 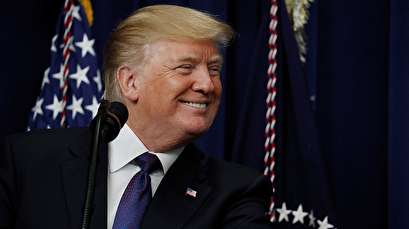 TEHRAN, Young Journalists Club (YJC) -President Donald Trump has announced the “winners” of his “Fake News Awards.” While the link failed to open for many amid the high internet traffic, a web archive reveals the New York Times and CNN are among the top three.

Trump also tweeted that there are “great reporters” whom he respects. He did not name any of those journalists, though, unlike the treatment dished out to the “Fake News” awardees.

A blog titled “The Highly-Anticipated 2017 Fake News Awards” on the official Republican Party website shows the top winner of Trump’s fake news accolades to be New York Times columinist and economist Paul Krugman, who claimed on Election Day 2016 that the “economy would never recover” from Trump’s “historic, landslide victory,” according to a copy of the GOP blog archived by the nonprofit Internet Archive.

Second place went to ABC News' Brian Ross, whose reporting cited an anonymous source claiming that an associate of Trump's former national security adviser Michael Flynn was going to testify that Trump “directed him to make contact with the Russians” while being a presidential candidate. Ross, however, corrected his story to say that Trump was president-elect at the time, only after crashing the stock market.

CNN scooped third place. Without mentioning CNN congressional correspondent Manu Raju by name, the award refers to a false reportthat Trump's son, Donald Trump Jr., received advanced exclusive access to documents published by Wikileaks via email. Raju corrected it once he discovered that his anonymous source got the date of the email wrong, but not before several other news networks made the exact same error, also citing anonymous sources.

The so-called awards went on to list seven other inaccurate stories about Trump that were later corrected, from Trump removing a Martin Luther King, Jr. bust from the Oval Office, to Polish First Lady Agata Kornhauser-Duda not shaking his hand, to false news of the Trump administration hiding a climate change report.

The eleventh slot awarded no particular outlet or journalist. It simply read: “In Trump’s words, '‘RUSSIA COLLUSION!’ Russian collusion is perhaps the greatest hoax perpetrated on the American people. THERE IS NO COLLUSION!'”

Trump's announcement coincided with an event at the Newseum in Washington, DC, where White House correspondents Jim Acosta of CNN, John Roberts of Fox News and April Ryan of American Urban Radio Networks discussed “Journalism in the Trump Era: Assessing Press Freedom in the United States.” Trump was heavily criticized during the DC forum for going too far during his campaign, and, as president, for routinely condemning outlets he deemed “fake news media.”