TEHRAN, January 18 -Venezuela has confirmed that a rogue pilot who had orchestrated attacks on government sites last year was among a group of militants killed in a recent operation. 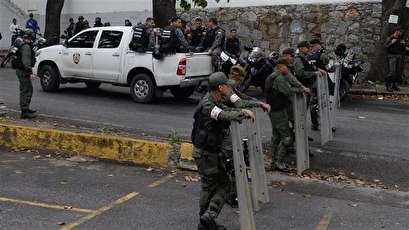 TEHRAN, Young Journalists Club (YJC) -Venezuela has confirmed that a rogue pilot who had orchestrated attacks on government sites last year was among a group of militants killed in a recent operation.

The Venezuelan government located Oscar Perez — a former police pilot-turned-militant — and launched an operation to capture him in a suburb of the capital, Caracas, on Monday. While the government announced later that same day that a number of wanted individuals had been killed, it was not clear whether Perez had been killed or captured.

On Tuesday Venezuelan time, Interior Minister Nestor Reverol confirmed that Perez was among the dead.

In a statement, Minister Reverol said Perez had opened fire first, and that seven “terrorists,” including him, had been killed in a house in El Junquito district, outside Caracas.

Two police officers were also killed and five were wounded in the counter-terrorism operation.

Back in June 2017, and at the height of protests against Venezuelan President Nicolas Maduro, Perez and unidentified accomplices used a police helicopter and dropped a number of grenades on the Supreme Court building in Caracas before opening fire on the Interior Ministry headquarters, prompting the authorities to initiate a manhunt for him and members of his outfit.

Perez had been on the run since the Venezuelan government accused him of a “terrorist attack” and issued an Interpol alert demanding his arrest. Ha had occasionally appeared on social media, taunting the government from hiding.

Reports said on Wednesday that groups of soldiers, carrying anti-riot shields, had cordoned off a Caracas morgue where Perez’s corpse was being kept.

Critics have claimed that Perez and his men had been killed in what seemed to be “an extrajudicial execution,” demanding the initiation of an investigation into their deaths.

The government, however, argued that police were “attacked violently” when they were negotiating the surrender of Perez’s group, saying they also “tried to detonate a vehicle loaded with explosives.”

In December, Perez claimed responsibility for an assault on a military post near the capital, Caracas, in which a small amount of weapons were stolen.