TEHRAN, January 18 - A mysterious die-off of tens of thousands of critically endangered Saiga antelopes in Kazakhstan in 2015 could have been triggered by environmental factors, a new study suggests. 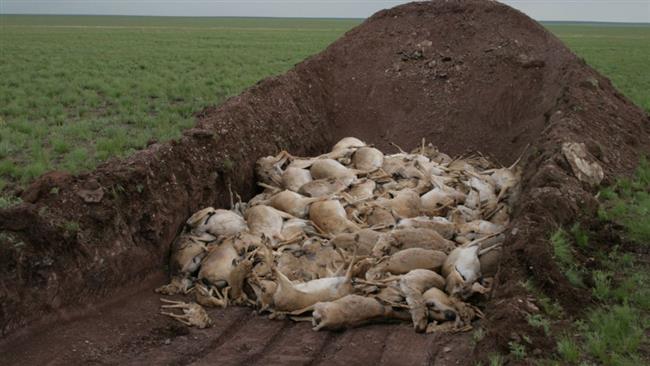 TEHRAN, Young Journalists Club (YJC) - Back in May 2015, Kazakh authorities were shocked when they saw that in a matter of three weeks, some 200,000 of the antelopes or two-thirds of the entire population of world’s Saiga species dropped dead in a mass mortality event over a large area of central Kazakhstan.

Initial investigations into the incident showed that the proximate cause of death was hemorrhagic septicemia caused by the bacterium Pasteurella multocida type B.

The Saiga antelopes typically wander over large tracts of Central Asian grassland, but every spring, tens of thousands of them come together in the same place to give birth.

During the past three years, scientists sought to determine why an annual joyous event turned so tragic for the creatures.

A multi-disciplinary team of scientists, employing satellite images, weather records, and statistical analysis, launched a thorough research to look at environmental conditions at the time. The results, published in the journal Science Advances on Wednesday, suggested that unusually high humidity and temperatures at the time of the calamity could have triggered the bacterial onslaught.

“Statistical modeling suggests that there was unusually high relative humidity and temperature in the days leading up to the mortality event; temperature and humidity anomalies were also observed in two previous similar events in the same region,” the study suggested.

However, the mechanisms by which climate factors triggered the bacterial attack remain unknown and require future studies, the authors of the study said.

As the study mentioned, two other mass die-off events involving Saiga antelopes occurred during the past 40 years. In 1981, 70,000 Saigas or about 15 percent of the population in the Kazakh region of Betpak-Dala died.

Data, according to the new study, revealed that in the days leading up to all the die-offs, humidity had been higher than usual — over 80 percent — and the average minimum daily temperatures had also been higher than normal, specially in 2015.

“The scale and nature of this event also point to the need for ongoing scientific and veterinary monitoring of wildlife populations and the need to be prepared for rapid and rigorous responses to disease outbreaks when they occur,” the authors of the study said.