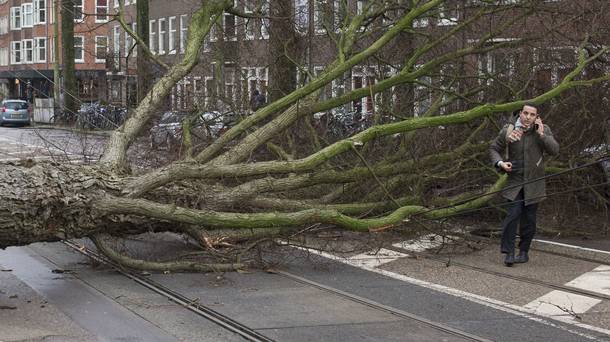 TEHRAN, Young Journalists Club (YJC) - Schiphol tweeted shortly after 11am local time that it was halting all take-offs and landings “until further notice” because of the severe weather conditions.

Status update due to severe weather conditions: all air traffic has been suspended until further notice.

Flag carrier KLM already had scrapped more than 200 flights before the storm.

National broadcaster NOS reported that the main railway station in The Hague was closed because of fears that parts of its new glass roof would be blown off by Thursday’s storm.

Traffic on Dutch roads was plunged into chaos, with the wind blowing over trucks and toppling trees and hampering efforts to clean up the mess. In Amsterdam, authorities halted all trams.

The national weather service said it recorded wind gusts of up to 140 kph (87 mph) in the southern port of Hook of Holland as the storm passed over the Dutch coast.

Water authorities in the low-lying Netherlands also were closely monitoring the storm and preparing to close locks and storm barriers if necessary because of high-water levels.

Before halting all trains, the Dutch rail service reported numerous incidents including a collision between a train and a trampoline. The service had no further details of the collision.

In Amsterdam, a man had a narrow escape when a tree was blown over onto his scooter. He escaped unhurt.

Neighbouring Belgium also was being lashed by the storm with the port of Ghent closed because of the high winds.

Belgium set off its code orange alert — the second highest storm warning — for the north of the country early Thursday and tram traffic had to be halted in parts of the capital Brussels, where several public parks had to be closed.

Trees were uprooted in several cities but air traffic at the international airport of Zaventem was largely uninterrupted.

In many parts of Germany, schools remained closed as the country prepares for the storm that was expected to bring heavy snow, rain and gusty winds.

Authorities warned Germans, especially in western and northern Germany, to not leave their homes on Thursday if possible.

German Railways said on its website that many trains would decrease their speed because of the storm and that delays are expected.

Firefighters and police responded late Wednesday to numerous car crashes in northern and southern Germany because of heavy snowfall and slippery roads.

German news agency dpa reported that police said that there were crashes “every other minute” on highways between Wilhelmshaven and Westerstede in northern Germany.