Turkey says its 'mistrust' of Washington over Syria continues

TEHRAN, January 18 - Turkey said on Thursday it was not satisfied with Washington's attempts to allay its concern about the creation of a Syrian border force on its southern frontier, adding its "direct mistrust" of the United States continued. 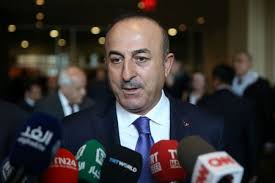 TEHRAN, Young Journalists Club (YJC) - NATO member Turkey has reacted angrily to a statement by the U.S.-led coalition that it is helping set up a new 30,000-strong border force in Syria including members of the Syrian-Kurdish YPG militia.

Turkey regards the YPG as a terrorist organization and an extension of the outlawed Kurdistan Workers Party (PPK), which has waged a three-decade-old insurgency in Turkey's southeast.

On Wednesday, U.S. Secretary of State Rex Tillerson said he had met with Turkish Foreign Minister Mevlut Cavusoglu to clarify the issue, and said the situation had been "misportrayed, misdescribed".

"We voiced our discomfort in the meetings we held with the Secretary of Defense and the Secretary of State ... However, the United States' statements did not fully satisfy us," Cavusoglu told broadcaster CNN Turk in an interview.

Cavusoglu reiterated Turkey's warning that it would intervene militarily in the Kurdish-controlled Afrin region close to the Turkish border, and said he had told the United States that Ankara did not want to face an ally there.

"We will intervene in Afrin. We will also take steps to the east of the Euphrates against threats," Cavusoglu said.