US lawmakers look for short-term fix to avoid shutdown

TEHRAN, January 19 - Acrimony between Donald Trump and Democrats over explosive remarks by the president last week has undermined hopes of a deal on government funding and immigration, with aides now working towards a spending fix that would last only a few weeks. 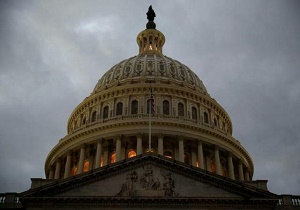 TEHRAN, Young Journalists Club (YJC) - The US president on Monday attempted to pressure the Democrats over immigration by accusing them of threatening to shut the government down and damaging the prospects for military spending.

The two sides appeared far apart in the wake of controversial remarks by the president last week in a meeting in which he was reported to have demanded a stop to immigration from “shithole countries”.

The immigration discussions have become wound up with a debate over funding to keep the government running, with some Democrats insisting they want to see a spending plan that includes protections for beneficiaries of an Obama-era program called Deferred Action for Childhood Arrivals.

If a deal on public spending is not struck between lawmakers in the House and Senate by the end of Friday the government will have to go into a shutdown.

The last time this happened was in 2013, an episode that lasted 16 days and led to federal employees being put on unpaid leave for the equivalent of 6.6m days between them.

Aides said on Tuesday that the most likely outcome this week was for a short-term package that will continue current levels of spending until around February 16.

Those include whether a legislative package to help Daca recipients can be struck and whether Democrats will concede any funding for Trump’s proposed border wall with Mexico.

In addition, the two sides need to decide on raising caps on defense and non-defense spending imposed by the 2011 Budget Control Act.

Stan Collender, a budget expert and former congressional official, said there was still reason to doubt whether Democrats would vote for a short-term extension, called a continuing resolution (CR), and whether the president would sign one.

“The [Democratic] base is pro-Daca and angry about the fact they don’t have a strategy to deal with it,” he said, suggesting a bill that does nothing for the undocumented immigrants could inflame the party’s voters even further.

“Who causes the shutdown and who gets blamed for it are two different things,” said Collender.

“If Trump vetoes the CR he will clearly be the cause of the shutdown, but he will blame the Democrats for not giving him the wall. “If the Democrats filibuster it in the Senate, they will clearly be the cause, but they will blame the president for refusing to compromise.” Trump has proven more willing to publicly countenance the idea of a government shutdown than his predecessors.

Share to
Related News
Man kills self after throwing explosive at US embassy in Montenegro
Most Americans oppose border wall, don't believe illegal immigrants commit more crime
First day of government shutdown ends in standoff
Below the belt: 6 most personal attacks on Trump during his first year in White House
US government shutdown begins over budget impasse
Trump blames Democrats for looming government shutdown
Tags
US ، lawmakers ، shutdown
Your Comment