TEHRAN, January 20 -A British monitoring group says up to 6,000 Syrian and Iraqi civilians were killed in US-led coalition airstrikes in 2017 alone. 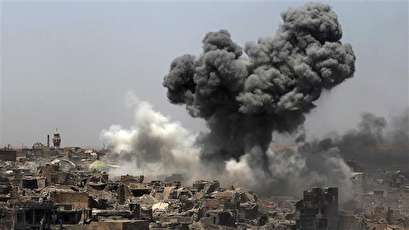 Airwars, a London-based monitor, estimated that the number of civilian deaths in the two countries surged by 200 percent in 2017 compared to the year before.

“In 2017 the war against ISIS (Daesh) moved into the most densely-populated urban centers controlled by the group, with dire results for civilians,” Airwars said.

"This toll coincided with the start of the Trump presidency, which has declared the conflict against [Daesh ] to be a 'war of annihilation'," it said.

According to Airwars, the coalition conducted almost 11,573 artillery and air strikes, which showed an increase of 50 percent in comparison with the previous year.

More than 70 percent of the strikes were in Syria, it added.

The group also noted that 766 attacks carried out last year wounded some 2,443 civilians in both countries.

The revelations contradict the US military figures that put the overall civilian death toll in US-led operations at just over 600 since late 2014.

Washington claims that its airstrikes target militants, but reports on the ground indicate that many civilians have fallen victim to such attacks.

Daesh started its campaign of terror in Iraq and Syria in 2014 and swiftly seized a territory roughly the size of Britain after declaring a cross-border “caliphate.”

The US-led coalition of 68 nations has been conducting airstrikes in Syria since September 2014 without any authorization from the Damascus government or a UN mandate. Similar air raids had begun in Iraq in August of the same year.