TEHRAN, January 20 -Cuban and US officials have concluded their week-long talks in Washington on law enforcement collaboration amid tensions between the long-time foes. 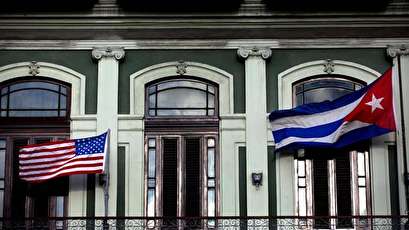 TEHRAN, Young Journalists Club (YJC) -Cuban and US officials have concluded their week-long talks in Washington on law enforcement collaboration amid tensions between the long-time foes.

The talks, which included a meeting on ways to combat illicit narcotics trafficking, ended on Friday, indicating that the two sides continue to work together in certain fields despite hostile policies adopted against Havana by the Republican administration of US President Donald Trump since he took office last year.

“The meeting took place in an ambiance of respect and professionalism,” said the Cuban Foreign Ministry in a Friday statement. “Both parties shared the view on the usefulness of the meeting and agreed to maintain the talks in the future.”

According to the ministry, the US and Cuban authorities also discussed cyber security and terrorism prevention.

The latest talks marked the fourth technical negotiations between the two on combating drug trafficking since Cuban and American authorities set up the law enforcement dialog framework back in November 2015 following the official restoration of diplomatic ties in July of that year by the then US president, Barack Obama.

Obama and Cuban President Raul Castro originally announced a historic thaw in ties after five decades of enmity on December 17, 2014.

The two governments then opened embassies, renewed commercial flights and negotiated accords on issues, including the environment, law enforcement, the postal service and communications.

Such measures remain intact although Trump declared a partial rollback of the detente last June and ordered tougher trade and travel restrictions with Cuba.

Trump administration further cut the number of diplomatic staff at the US embassy in Havana last September over what Washington claimed as a mysterious spate of illnesses among two dozen of American diplomats and their relatives in the Cuban capital.