Shutdown talks with Trump like negotiating with jello: Schumer

TEHRAN, January 21 - Senate Democratic Leader Charles Schumer has lambasted President Donald Trump for being an unreliable negotiating partner following a failure to secure a deal to avert a government shutdown. 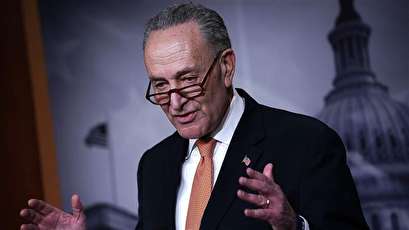 "Negotiating with this White House is like negotiating with jello, it is next to impossible," Schumer said Saturday afternoon. "President Trump just can't take yes for an answer."

The US government officially shut down early on Saturday after lawmakers in the upper chamber of Congress could not reach a deal on a short-term budget for funding government operations.

Republicans in the Senate fell well short of the 60 votes necessary to pass a temporary spending bill, which had passed the House of Representatives on Thursday.

The vast majority of Democratic senators have said they would not support the legislation unless it includes protections for hundreds of thousands of young undocumented immigrants, but Republicans have so far refused.

Schumer, who had earlier met with Trump at the White House, said he was confident that a deal was close.

But he later noted that Trump called him and talked about extending government funding for three weeks, as GOP leaders want.

Schumer said he was given a list of new demands by White House Chief of Staff John Kelly, who is emerging as a hardline voice on immigration.

"When you sit with the president ... you can see that he really wants to do it," he said. "But then a few hours later because of the right wing pressure, he backs off."

"He's rejected not one but two viable bipartisan deals, including one in which I put his most prominent campaign pledge on the table, ” he told the Senate floor.

Meanwhile, Senate Majority Leader Mitch McConnell pledged on the Senate floor late Saturday to adopt a new spending plan by Monday morning, or sooner, that would allow government to operate through February 8.

Share to
Related News
US government shuts down once again after Senate misses deadline to pass funding
U.S. government workers awake to shutdown, Senate vote looms
US govt shutdown continues for 3rd day as Senate fails to reach funding deal
First day of government shutdown ends in standoff
US president urged S Korea's Moon to give him credit for N Korea talks
Top US official enters MidEast after Jerusalem recognition
Below the belt: 6 most personal attacks on Trump during his first year in White House
Trump, brandishing sanctions against Iran, ditched by experts
Tags
Shutdown ، Trump ، negotiating with jello
Your Comment