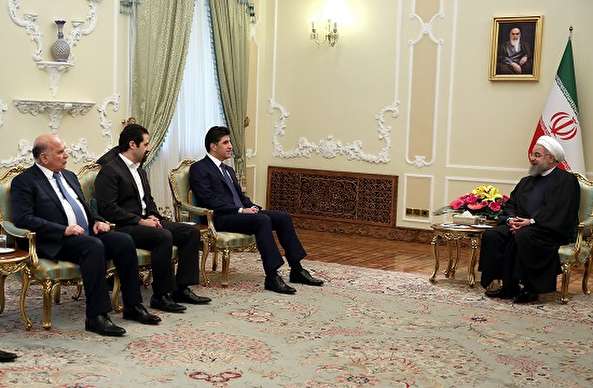 TEHRAN, Young Journalists Club (YJC) - “The Islamic Republic of Iran will always back a united Iraq,” he said, adding, supporting one single sovereignty and strengthening regional borders is the duty of all countries in the region.”

He made the remarks in a meeting with Nechirvan Barzani, Prime Minster of the Kurdistan Regional Government (KRG) here in Tehran.

He also called for boosting efforts to strengthen friendly ties between Iran and Iraq.

Barzani, for his part, said, “We always want a united Iraq and we believe that all sides should live up to Iraqi constitution and settle problems based on the constitution.”

He also appreciated Iran’s support for KRG and specially against Daesh terrorist attacks, saying that, “We always appreciate support of the Islamic Republic of Iran for Iraq in this battle.”

He then called for boosting bilateral economic cooperation with the Islamic Republic of Iran.

Barzani noted that the KRG would not allow anyone to use KRG’s soil for any possible threat against the Islamic Republic of Iran and this issue is a redline for Erbil.