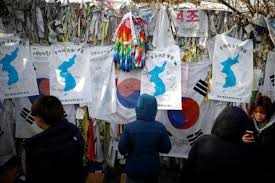 South Korean police intervened when one group of conservative critics burned a picture of North Korean leader Kim Jong Un on the steps of Seoul’s central train station where Hyon and the rest of her team had earlier arrived from Gangwon province, where the Olympics will be held from Feb. 9-25.

In a diplomatic breakthrough after a year of escalating tension over the North’s nuclear and missile program, the IOC announced on Saturday that North Korea will send 22 athletes to the Winter Games and compete in three sports and five disciplines.

Holding a sign saying “We’re opposed to Kim Jong Un’s Pyongyang Olympics!”, the protesters chanted that the North had “snatched” attention from South Korea’s long-awaited hosting of the Winter Olympics.

“The Pyeongchang Olympics is degrading to a Pyongyang Olympics of Kim Jong Un who is propagating the North Korean system and trying to make its nuclear weapons a done deal”, said Cho Won-jin, a ultra-conservative lawmaker who led the rally, according to a video footage.

Overall, a majority of South Koreans say they welcome North Korea participating in the Games, and South Korean officials hope to use the thaw in relations to make a larger diplomatic breakthrough over the North’s rogue nuclear weapons program.

A series of events including concerts, joint training exercises and sporting demonstrations are planned around Olympics.

Hyon, a wildly popular entertainer in the North, smiled and waved to residents who gathered to greet her as she arrived at a train station near the main Olympic village of Pyeongchang earlier in the day.

“Seeing the citizens here welcoming us, I feel we will be able to successfully complete the concert”, Hyon was quoted as saying by a Seoul official, according to a South Korean media pool report.

Monday’s protests were small but highlighted the mixed reaction to the fragile detente between the two Koreas.