‘We agreed to disagree’: Pence & King Abdullah clash over US recognition of Jerusalem

TEHRAN, January 22 -The US vice president has said that he and King Abdullah II of Jordan have “agreed to disagree” over the impact of the Trump administration’s decision to recognize Jerusalem as the capital of Israel. 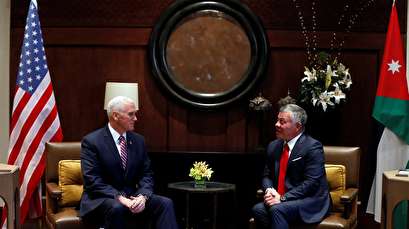 TEHRAN, Young Journalists Club (YJC) - The US vice president has said that he and King Abdullah II of Jordan have “agreed to disagree” over the impact of the Trump administration’s decision to recognize Jerusalem as the capital of Israel.

Mike Pence met with the monarch in the Jordanian capital of Amman Sunday as part of his three-country Middle East tour. Speaking at a media conference, Abdullah told Pence that he looked to Washington to build “trust and confidence,” but added that Jordan viewed the Israeli-Palestinian conflict as a “potential major source of instability” in the region.

Pence said he wanted to maintain Jordan’s role as custodians of Jerusalem’s holy sites and reaffirmed Washington’s commitment to a two-state solution. "We take no position on boundaries and final status. Those are subject to negotiation,"Pence said.

Jordan’s monarch was insistent that East Jerusalem has to be the capital of a future Palestinian state established on lands captured by Israel in 1967. "We hope that the US will reach out and find the right way to move forward in these challenging circumstances," he said.

Pence, who had been met by pockets of protest upon his arrival in Amman, said he had “agreed to disagree” with King Abdullah over what the the decision to recognize Jerusalem as the Israeli capital would mean for the region and the future of the peace process.

Trump’s Jerusalem declaration was met with widespread protests across the Arab world, drawing criticism from regional leaders who see it as the end of America’s role as mediator in Israeli-Palestinian negotiations and scuppering any hopes of a comprehensive settlement between the two parties.

Pence started his three-country tour with a meeting with Egyptian President Abdel Fattah El-Sisi in Cairo's presidential palace Friday. Following his meeting with King Abdullah, the US VP flew to meet US troops at a military base near the Jordan-Syria border. From there, he flew to Tel Aviv where he was met by Prime Minister Benjamin Netanyahu Sunday night.