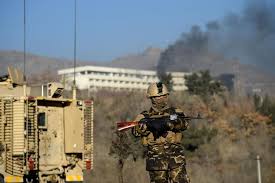 TEHRAN, Young Journalists Club (YJC) - A militant attack on the luxury hotel in the Afghan capital of Kabul has reportedly ended after 12 hours, leaving 18 people dead.

He also extended condolences to families of the victims.

“No doubt that those resorting to creating panic, violence and murder to reach their targets should learn lessons from how Takfiri terrorism ended up in the region over the past few months,” he said.

Taliban claimed responsibility for the attack.