TEHRAN, January 22 - Giant oil slicks have reportedly been forming off China's east coast just over a week after a burning Iranian oil tanker sank in the area, amid warnings by environmentalists that the spill could threaten the marine life there by exposing it to extremely toxic substances. 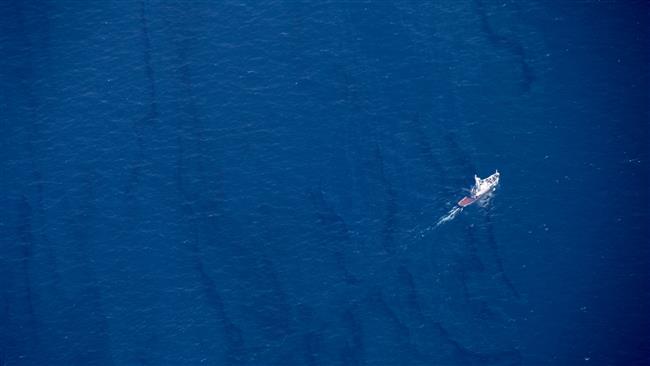 TEHRAN, Young Journalists Club (YJC) - The State Oceanic Administration said in a statement late Sunday that three oil slicks with a total surface area of 332 square kilometers had been most recently spotted, up from 101 square kilometers reported on Wednesday,

Three coast guard vessels were on the scene assessing the spill, the oceanic administration added.

The Iranian tanker, named Sanchi, was carrying 136,000 tonnes of light crude oil when it collided with a huge Chinese freighter named the CF Crystal in early January.

The type of condensate oil carried by the Sanchi does not form a traditional surface slick when spilt, but is nonetheless highly toxic to marine life and much harder to separate from water. The cargo amounted to nearly one million barrels (bbl) of oil.

It is also said to be on the migratory pathway of numerous marine mammals, such as humpback and grey whales.

Earlier reports from Wednesday said an oil slick measuring about 101 square kilometers had been spotted, showing the polluted area had expanded by three times in size.

China is continuing its cleanup operations in an area of 260 square kilometers around the sunken oil tanker.

“Oil is continuing to come out of the place where the ship sank. What we are doing is to send a task force to clean up the oil spill found on the sea surface,” said Zhi Guanglu, deputy director of the China Maritime Search and Rescue Center.

“The fundamental way to eliminate the pollution source is to salvage the wreckage.”

Of the 32 sailors aboard the ship, three bodies were recovered, with 29 others, who are all presumed dead, still missing.