TEHRAN, January 23 -The United States is making false claims about the presumed military threat from Russia and China to justify channeling more money into the military, an American political analyst says. 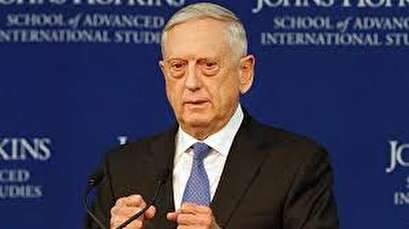 Brian Becker, a Washington-based analyst with the A.N.S.W.E.R Coalition, made the remarks while discussing US Defense Secretary James Mattis’ new warning that the US military’s advantage over Russia and China is eroding.

The assessment is part of an unclassified summary of the Pentagon's new National Defense Strategy Mattis unveiled on Friday.

His remarks come as President Donald Trump and his administration are concerned that the US military force is being affected by years of budget shortfalls and atrophy, and that it has to fully reboot in order to restore it to an ideal strength.

The Pentagon’s assessment about the military threat from Russia and China “seems on its face to be absolute madness,” Becker told Press TV Monday, saying Washington was seeking an alternative goal.

“If such a war was to take place it would spell the destruction perhaps not of the entire planet but a good segment of the people,” he added. “So this is insanity.”

The US political establishment, however, needs such remarks to tighten its grip on the American people’s wealth and channel more money to its military adventures Becker argued.

“The Pentagon is providing a self-serving rationale for devouring bigger and bigger parts of the American national treasury,” he explained, noting Washington needs a “big enemy” to get away with this practice.

Noting that the last time the US was invaded by any country was over 200 years ago by the UK, Becker said Russia and China were nothing like the enemies that Washington was trying to make them look like.

“What we are seeing here is the news once again of the banner of national security that is nothing more than a pretext for the diversion of funds to the military machine,” Becker said.

The US think tank RAND Corporation released a report in December, warning that the United States would likely lose a simultaneous military confrontation with Russia and China.

Thanks to their major technology advancements over the past years, the two Asian countries have now reached a level that they can top the US in certain areas of military prowess, the report said, warning that limited budget and a lack of enough forces to support the “ambitious” US military plan were hindering American forces.