Good grounds for international cooperation for Iran despite US new sanctions: Vice President

TEHRAN, January 23 - In a meeting with Belarus’s Minister of Industry Vitaly Vovk, Iran’s Vice President said that despite the US sabotage and new sanctions against Iran, a good ground for international cooperation has been created for Iran. 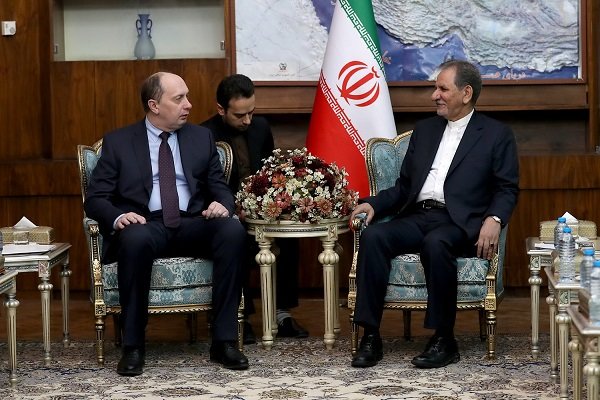 TEHRAN, Young Journalists Club (YJC) - Esahaq Jahangiri said that the Tehran and Minsk had good bilateral relations that could have a significant role in developing the ties between the two countries.

In this regard, Jahangiri stressed that the two country could have mutual exchanges on such areas as combine harvesters and tractors, pharmacy, high-tech and military industries, as well as oil industry.

The Iranian official hoped that the obstacles on the way of developing the two countries identified and solved in order for rasing the volume of trade exchanges between two countries.

Vitaly Vovk also for his part pointed out to the cooperation grounds between the two countries including pharmacy, electronic transportation, and joint production.

“On this trip, we have negotiated and agreed with the Iranian side to create new areas of cooperation between the two countries, and in within the very framework we will formulate a road-map for the development of trade exchanges by 2020” the Belarusian official asserted.

Wishing success for the Iranian nation on the occasion of the anniversary of the Islamic Revolution victory and called for the promotion of cooperation and increased trade between the two countries.